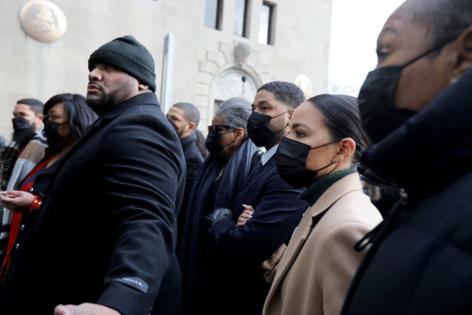 After almost three years of rollercoaster controversy, the trial of former “Empire” actor Jussie Smollett began Monday with the questioning of potential jurors about their exposure to news about the case.

As of about 2:30 p.m., six people — four men and two women — had been selected for the jury. Judge James Linn then questioned 16 more, and attorneys were huddling in sidebar, discussing which of the most recent group to keep.

Those selected for the panel include a woman who says she’s watched “Empire” before and likes to drag race in her spare time, a man who emigrated from Iraq 12 years ago and works for a credit union, and a woman from suburban Bartlett who’s a counselor at a behavioral hospital.

In his opening remarks to the jury pool, Linn said he expected a jury to be empaneled and opening statements to begin Monday. Linn said he may let evidence continue until 7 p.m. before recessing for the day.

The case brings with it immense baggage, including what became a political crisis of sorts for Cook County State’s Attorney Kim Foxx and the appointment of special prosecutor Dan Webb to handle the case. But jurors will be tasked with determining a far narrower question: Did Smollett in fact orchestrate a phony hate crime on himself, then lie to police about being a victim?

In his first round of questioning, Linn had asked specifically whether jury candidates had heard about the case in the news, seen “Empire,” watched the celebrity gossip site TMZ, or belong to any civil rights or anti-police groups.

So far only one prospective juror, a white woman, has said she might not be able to be fair, explaining that she’d done research on the case early on.