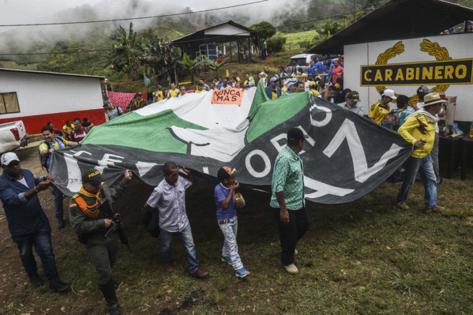 A top White House official is meeting members of the Colombian community in Miami on Monday to smooth over the controversy around the Biden administration’s recent decision to drop the Revolutionary Armed Forces of Colombia from the State Department’s list of terrorist organizations.

National Security Council Senior Director for the Western Hemisphere Juan Gonzalez is in Miami “to engage Colombian diaspora and Colombian-Americans on FARC de-listing and other issues,” a White House official said.

The trip comes after critical statements by Miami-Dade Mayor Daniella Levine Cava and Colombian-American Annette Tadeo, who is a Florida state senator running for the Democratic nomination for Florida governor.

“I urge the administration and the State Department to reject this move,” the mayor tweeted shortly after the Wall Street Journal first reported on the de-listing plans. “The FARC is a dangerous terrorist group that caused deep pain for so many. We’re at a pivotal inflection point in Latin America and should double down to reject the extremist communist agenda that destroyed nations like Venezuela.”

Tadeo, who left Colombia with her family fleeing from the violent conflict, told a local radio station the decision was “dangerous” and was poorly explained.

Florida Republicans also criticized the decision, with Senator Marco Rubio calling it an “incentive” for other “narco-terrorists” in the region.

The official announcement is expected Tuesday to coincide with the fifth anniversary of the peace agreement negotiated with the Colombian guerrillas in 2015, a State Department official told McClatchy. The accord, sealed in Havana, by former Colombian president Juan Manuel Santos and FARC leader Rodrigo Londoño Echeverri, known as “Timochenko,” ended five decades of a bloody armed conflict but polarized Colombians. A slight majority voted against ratifying it in October 2016. Many Colombian Americans in South Florida rejected the deal.

The accord was later revised and approved by the Colombian Congress.

Biden administration officials have said the de-listing would show support for the peace deal and signal that the U.S. can lift sanctions when bad actors change their behavior. Most of the FARC rebels returned to civilian life, and the group transmuted into a political force, the Common People party. According to the United Nations, around 13,000 former guerrilla fighters have demobilized, but less than half are involved in so-called society reintegration projects.

At the same time, the administration will place sanctions on FARC dissidents that have not given up arms and created other groups, such as the so-called Segunda Marquetalia, Gonzalez said on the Miami Spanish radio station Actualidad Radio Monday morning. Some of these former FARC members are actively engaged in drug trafficking, many out of Venezuela.

On Actualidad Radio, González said the de-listing of the FARC was an “administrative decision” after a review of the organization’s compliance with the peace accord that began under the Trump administration. He said the emphasis should be put instead on the inclusion of the new dissident rebel groups on the terrorist list.

“We are not condoning or absolving the FARC in any way,” he said. “I am going to Miami to explain the reasons behind the decision.”

The senior official also said dropping the FARC from the list would help the U.S. Agency for International Development (USAID) fund other programs supporting the deal.

“Comprehensive implementation of the Peace Accord remains a generational opportunity to strengthen access to security, democratic institutions, and economic opportunities for all Colombians,” Secretary of State Antony Blinken said in a statement last week. “We commend Colombia’s efforts in implementing the Peace Accord and look forward to continuing our close cooperation to support lasting peace.”