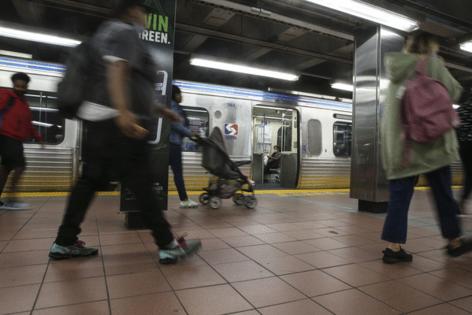 PHILADELPHIA — The man accused of raping a woman on a SEPTA subway train in full view of passengers was ordered Monday to stand trial after the woman testified that she had been drinking and “blacked out” on the night of the alleged attack.

Fiston Ngoy, 35, faces charges of rape, sexual assault and related offenses. Prosecutors say he attacked the woman Oct. 13 in a crime that drew international attention after law enforcement officials initially said bystanders stood by and did not intervene. Authorities later said that passengers likely did not realize what was happening and that one, on off-duty employee of the Southeastern Pennsylvania Transportation Authority, called 911.

During Monday’s hearing in a Lansdowne courtroom, the woman said she was intoxicated and remembered little about the assault.

“He kept pushing himself on me,” she told Magisterial District Judge Harry J. Karapalides. “I was out of it. ... I came to with people standing over me.”

The woman said she had gone to a speakeasy bar behind a deli in West Philadelphia, where she had three beers before leaving to catch a SEPTA train. She said she continued to drink beer as she boarded the wrong train, inadvertently heading eastbound on the Market-Frankford Line, the opposite direction of where she had intended to travel.

Ngoy sat down next to her and began to talk to her, according to the affidavit of probable cause for his arrest. In a recorded statement played at the preliminary hearing, he told detectives that he had seen the woman before and that she asked him if he wanted to have sex with her.

Surveillance footage, which was not played during the hearing, contradicted this, prosecutors said: It shows the woman repeatedly pushing Ngoy away and struggling with him on and off for 40 minutes before the attack, according to the affidavit.

First Assistant District Attorney Tanner Rouse said that what happened next was a crime.

“Think of all those college scenarios where a woman is passed out drunk and someone takes advantage of her,” Rouse said. “That is what we have here. The only difference is the setting.”

Ngoy was arrested inside the train car at the 69th Street Transportation Center in Upper Darby.

Ngoy’s attorney, Mary Elizabeth Welch, said prosecutors had failed to disprove her client’s version of the encounter — that it was consensual — and stressed that the victim doesn’t remember what happened.

“There was no evidence whatsoever presented to this court that it was by forcible compulsion,” she said.

The judge disagreed and ordered Ngoy to stand trial in the county court, where he faces an arraignment in January. He remained in custody, in lieu of $18,000 bail.