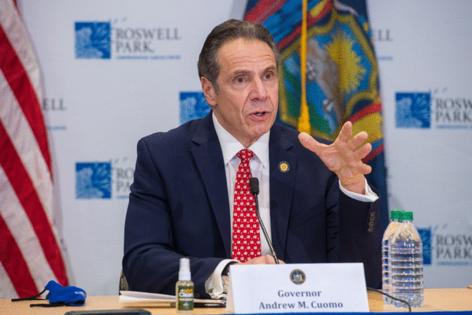 NEW YORK — Videos of former New York Gov. Andrew Cuomo’s sometimes tense, sometimes playful testimony from the sexual harassment investigation that led to his resignation were released Monday, part of a broader dump of transcripts and clips by the state attorney general’s office.

The report from Letitia James’ office, published Aug. 3, found Cuomo had sexually harassed at least 11 women and came as a devastating blow to the already embattled leader. He resigned in disgrace a week after its publication.

In his July 17 testimony, Cuomo wore a navy blue suit and a light blue tie. At times he sipped from a Dunkin’ Donuts cup, at others, he put on spectacles.

About an hour into the testimony, he calmly dodged questions from the interrogator, Joon Kim, about the meaning of the word girlfriend. Smirking slightly, he said: “Nowadays, Mr. Kim, I believe you have to be very careful about how you define what term.”

At the end of his daylong testimony, which finished about 7 p.m. that day, Cuomo sat back in his chair. “I would like to say it’s been a pleasure, Mr. Kim, but I’m under oath,” he declared, laughing.

The attorney general’s office is releasing documents and exhibits from the probe on a “rolling basis” and is proceeding “pending redactions to protect the privacy of individuals,” the office said in a Monday morning statement. The office also released transcripts from interviews with Cuomo’s top aide, Melissa DeRosa, and his brother, Chris Cuomo.

“Additional transcripts and exhibits will be released as they are available,” said the statement.

James’ office had previously published transcripts from the six accusers who appeared in videos released Monday. A 515-page transcript of Cuomo’s testimony was first made public on Nov. 10.

Cuomo, a Democrat, denies the allegations of sexual harassment. His spokesman Rich Azzopardi has described James’ investigation as politically motivated.

James is now running in next year’s Democratic primary for governor. The findings of her office’s probe — which was conducted by independent investigators she appointed — were supported by a state Assembly impeachment report published a week ago.

“We have reviewed the former Governor’s challenges to the allegations, and nothing in his voluminous submissions can overcome the overwhelming evidence of his misconduct,” said the Assembly report.

In his interview for the attorney general’s investigation, Cuomo described incredulity at the allegations against him.

“I am 63 years old,” he said, drawing out syllables slowly and holding his hands out in front of him. “I have been in every public office — state, federal. Numerous people have tried to set me up. I’m always wary of people. I have phenomenal precautions. It would be an act of insanity.”