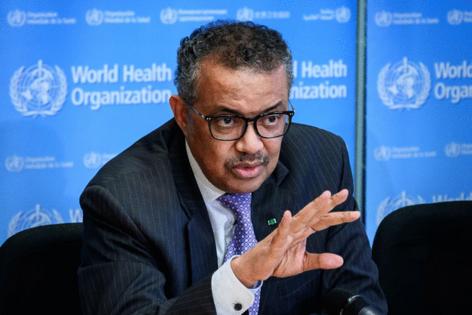 The World Health Organization is urging caution after two South African health experts, including the doctor who first sounded the alarm about the omicron variant, indicated that symptoms linked to the coronavirus strain have been mild so far.

The initial reported infections were among university students, the WHO said, adding that younger patients tend to have milder symptoms.

“Understanding the level of severity of the omicron variant will take days to several weeks,” the WHO said in a statement Sunday, adding that “there is currently no information to suggest that symptoms associated with omicron are different from those from other variants.”

The latest variant wreaked havoc in global markets on Friday, and early signs in Asia suggest an uneasy start to the new week as traders digest omicron’s initial impact and spread. Equity futures for Japan, South Korea and Australia pointed lower, and currencies were generally steady. The rand strengthened.

The U.K. government will convene an urgent meeting of Group of Seven health ministers on Monday to discuss the latest developments, according to the country’s Department of Health. In the U.S., President Joe Biden will give an update also on Monday, the White House said.

South Africa, which first identified the new variant, currently has 3,220 people with the coronavirus infection overall, though there’s been no real uptick in hospitalizations, Barry Schoub, chairman of the Ministerial Advisory Committee on Vaccines, told Sky News on Sunday.

“The cases that have occurred so far have all been mild cases, mild-to-moderate cases, and that’s a good sign,” said Schoub, adding that it was still early days and nothing was certain yet.

The WHO said there was preliminary data showing increasing hospitalizations, “but this may be due to increasing overall numbers of people becoming infected, rather than a result of specific infection with omicron.”

South Africa has been hit with a number of travel bans from the U.K. and other nations, after its scientists found the mutated variant last week. Since then, a growing number of European countries, along with Australia, have also identified people infected with the variant.

The large number of mutations found in the omicron variant appears to destabilize the virus, which might make it less “fit” than the dominant delta strain, said Schoub.

“In a way, hopefully it won’t displace delta because delta we know responds very well to the vaccine,” he said.

Only about a third of South African adults are vaccinated.

Angelique Coetzee, chair of the South African Medical Association, called symptoms associated with the variant at this point “different and so mild” compared with others she’d treated for the virus in recent months.

Coetzee, who first spotted what turned out to be the new variant, told the U.K.’s Telegraph newspaper that a number of healthy young men turned up at her clinic “feeling so tired.” About half were unvaccinated.

“What we are seeing clinically in South Africa and remember, I’m at the epicenter, that’s where I’m practicing, is extremely mild,” she said Sunday on the BBC’s “Andrew Marr Show.”

“We haven’t admitted anyone” to the hospital with the new variant, she said. “I spoke to other colleagues of mine, the same picture.”

Asked if authorities around the world were panicking unnecessarily, Coetzee said “yes, at this stage I would say definitely. Two weeks from now on maybe we will say something different.”