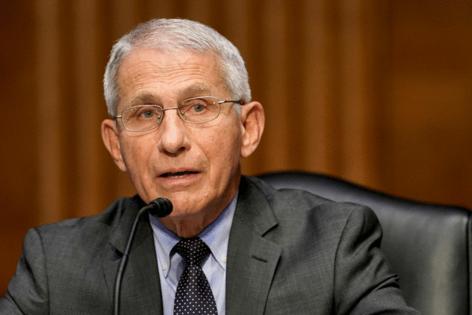 Omicron “is a clarion call” for people to be vaccinated, Anthony Fauci, who is President Joe Biden’s top medical adviser, said on NBC’s “Meet the Press.” Infections in the U.S. are already rising and stepped-up prevention with the emergence of the new variant will impact whether Americans are “headed into a bleak or bleaker winter,” he said.

Biden last week restricted U.S. travel links starting Monday with eight African countries including South Africa, where omicron was first identified. After Biden was briefed by his COVID response team and Fauci on Sunday, the White House said the president will provide an update on the U.S. response to omicron on Monday.

Francis Collins, director of the National Institutes of Health, said “there’s no reason to panic, but ... a great reason to go get boosted” with the discovery of omicron last week in South Africa. Existing vaccines have worked against mutations and may again now, he said on “Fox News Sunday.”

“Given that history, we expect that most likely the current vaccines will be sufficient to provide protection, and especially the boosters will give that additional layer of protection,” he added.

The omicron strain has spread rapidly in southern Africa and reached as far as Europe and Australia.

“Inevitably it will be” in the U.S., Fauci said on ABC’s “This Week” on Sunday. “The question is, will we be prepared for it?”

The U.S. has yet to stand up a national, comprehensive effort to sequence COVID-19 cases to help detect new variants. Instead, federal officials have largely relied on piecemeal state operations and other private labs to track variants. South Africa, on the other hand, is considered to have advanced genomic sequencing capability.

Omicron’s “molecular characteristics that would strongly suggest that it would be more transmissible,” Fauci said. For now, “we don’t know yet what the level of severity will be” nor how easily the variant evades existing vaccines, he said.

A new, targeted vaccine against omicron will take “at least three months or so to come into being,” Collins said. He said it’s “a great time” for Americans to get booster shots or initial vaccinations.

“Omicron is one more reason to do this,” Collins said.