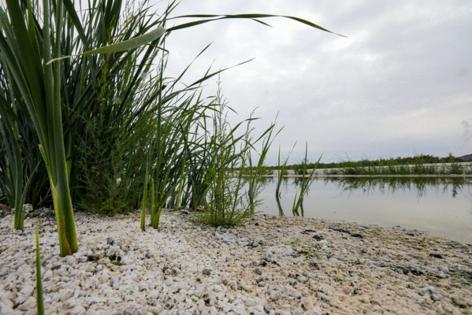 SALTON SEA, Calif. — Studying the complexity of mud on the ocean floor is a life’s work for Timothy Lyons, so when the tall and lean biogeochemist asks you to join an expedition in search of chemical mysteries buried deep beneath the waves, be prepared to get wet and dirty.

On a recent foray onto California’s largest and most troubled lake, Lyons rode a Zodiac skiff with a 15-horsepower engine across the Salton Sea against a backdrop of desolate mountains, dunes and miles of shoreline bristling with the bones of thousands of dead fish and birds.

As he approached the center of the lake with a clutch of passengers including two members of his laboratory at the University of California, Riverside, Lyons said, “Cut the engine. Let’s grab some mud.”

Moments later, Caroline Hung, 24, and Charles Diamond, 36, dropped a coring device over the side, then hauled up a sample of sediment that was gray on the bottom, dark brown on top, and as gooey as peanut butter.

“The big problem at the Salton Sea is intermingled with that organic brown layer on top — and to be honest, it’s scary,” said Lyons, 63. “It’s loaded with pesticides and heavy metals — molybdenum, cadmium and selenium — that linger in greatest concentrations in deeper water.”

“That should worry people, because the Salton Sea is shrinking and exposing more and more of this stuff to scouring winds that carry them far and wide,” he added. “Our goals include mapping where these hazardous materials are located, and determining where they came from and what may become of them if trends continue.”

For Lyons’ research team, filling blanks in existing data is an obsession, and it could have significant implications at a time when the air practically crackles with a volatile mix of environmental danger and economic opportunities promised by ongoing efforts to tap immense reserves of lithium, a key ingredient of rechargeable batteries.

Delays and costs are mounting for many projects that were designed to be showcases of restoration and dust mitigation. Scientists say it’s because the projects were developed without consideration for heat waves, severe droughts and water cutbacks due to climate change, or for the constantly evolving underlying geology at the hyper-saline landlocked lake at the southern end of the San Andreas Fault, where shifting tectonic plates bring molten material and hot geothermal brine closer to Earth’s surface.

Now, large corporations investing in proposals to suck lithium out of the brine produced by local geothermal operations have revived hopes of jobs and revenue from land leases, with lithium recovery projects potentially supporting internships, education programs and environmental restoration projects for years to come.