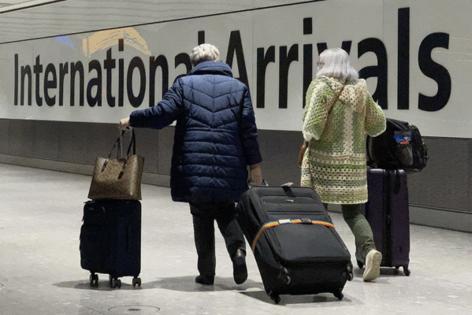 The U.K. confirmed the omicron COVID-19 variant in people with a connection to travel in southern Africa, as Germany and Italy identified suspected cases in recent travelers.

The U.K.’s announcement of two cases came as officials across Europe braced for the new variant to surface, days after it was first identified. Belgium, Hong Kong and Israel have confirmed instances of the new strain.

The cases confirmed in the U.K. and elsewhere have been seen in people who landed in Europe before travel bans kicked in late this week.

The U.K. cases “are linked, and there is a link with travel to southern Africa,” U.K. Health Minister Sajid Javid said. The individuals and their families are self-isolating now.

Prime Minister Boris Johnson announced a series of measures to tackle the variant, including a requirement for travelers to test and isolate upon arrival, and a tightening of face mask rules.

U.K. officials leaned on the country’s strong vaccination program as its main defense against the new variant, and said the booster program would be accelerated.

“We are not going to stop people traveling, I want to stress that,” Johnson said.

Bavaria’s health minister announced suspected variant cases in two people who flew into Munich on Nov. 24 from South Africa. Earlier, the Hessian Ministry for Social Affairs said a person who arrived in Frankfurt from South Africa was suspected of having the variant.

Results of complete sequencing of virus samples from the travelers haven’t been finalized in Germany.

Health officials in the Netherlands said Saturday that 61 people — or about one in 10 — tested positive for COVID-19 after flights from Johannesburg and Cape Town to Amsterdam’s Schiphol Airport on Friday.