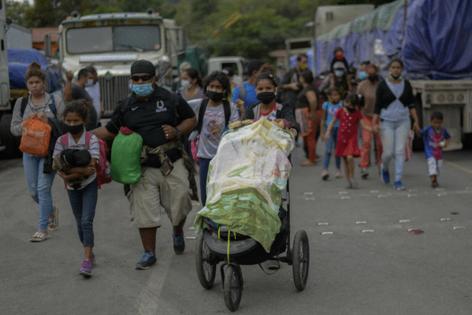 Xiomara Castro, the wife of a former president deposed in a coup, is leading in polls as she tries to end 12 years of rule by the conservative National Party. She spooked some investors by saying that capitalism hasn’t worked for most Hondurans and calling for a radical overhaul of the nation’s “failed neoliberal model.”

Some businesses in the capital, Tegucigalpa, boarded up windows for fear of the kind of violent unrest that followed the last election in 2017, which was widely regarded as fraudulent.

Hugo Noe Pino, an economist who worked on Castro’s government plan, said that the candidate would consider a plan with the International Monetary Fund if the conditions were right, and if the pace at which the deficit would be cut were not too onerous.

“People always invent these comparisons with Venezuela, Nicaragua and Cuba, but I’ve always said that the country we’d like to resemble is Costa Rica,” Noe Pino said Friday, in an interview in Tegucigalpa.

Castro wants to tax large fortunes, introduce a new welfare payment for poor households and senior citizens, and allow the central bank to lend to the treasury in emergencies. Her rhetoric has been more moderate than in previous campaigns, and some investors are waiting to see how she’ll govern if she wins, said Eurasia Group analyst Risa Grais Targow.

Honduras is one of the 15 remaining countries that has full official diplomatic relations with Taiwan rather than with the People’s Republic of China. Castro floated the idea of switching to Beijing if she wins, though Noe Pino said this isn’t a done deal and that local business groups have expressed concerns over the idea, which need to be taken into account.

Ruling party candidate Nasry Asfura, the mayor of the capital city and son of Palestine immigrants, is polling second. Asfura refers to himself as “Papi a la orden,” Spanish for “Daddy at your service,” and boasts that he doesn’t use a smartphone. He promises to pave thousands of miles of roads and boost agricultural jobs, trade and tourism.

Asfura is under investigation for the embezzlement of city funds, though he says he is innocent.