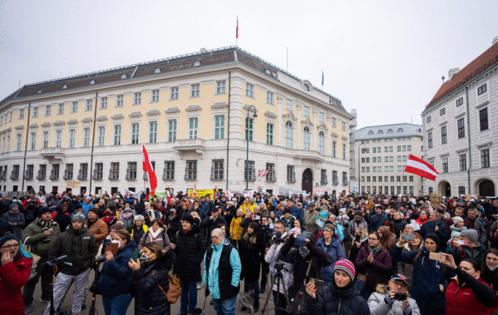 On Monday morning, Austria’s nearly 9 million residents woke to life in lockdown. Days later, a new COVID-19 variant set off alarm bells across the world, Europe and the U.S. slapped a travel ban on countries in Southern Africa and health officials raced to get ahead of a new threat.

It was the week the coronavirus reminded the world that the pandemic is far from over, delivering a combination punch of escalating infections, restrictions and a new mutation. The developments, marking a setback in the battle against the disease and a dent to the economic recovery, slammed stocks and oil prices.

Governments went to the tried and tested virus-fighting tools in their playbook as cases in Europe spiked.

Germany tightened restrictions for the unvaccinated, France toughened rules on mask wearing and health passes, and Austria closed businesses from hotels to gyms. Belgium ordered nightclubs to close and banned the public from indoor sporting events.

The U.K. at first ruled out tightening pandemic rules, but it did halt flights from six countries once news of the variant — B.1.1.529 — emerged. But on Saturday, the U.K. was forced once again to take measures to confront the spread of the virus after two travelers were found to have the omicron variant.

The European Union proposed also measures as several of its member states went ahead and restricted travel.

For London, it was a case of once bitten, having learned the price of dithering when it was slow to react to the delta variant, which has half as many mutations as B.1.1.529. Travel bans may be unpopular in some quarters, but it’s easier than hitting a weary public at home with lockdowns and other curbs on socializing.

There’s a sense that this script has become depressingly familiar after almost two years — but that familiarity also leavens the sense of panic that's greeted the arrival of previous variants.

Across Europe, peoples’ reaction to the recent news was far more muted than in the early months of the disease, a shift from fear, even panic, to resignation. This is the COVID world. The foreseeable future will bring rises and falls in infections, variants, intensive care needs and deaths — as well as the accompanying litany of measures from masks to tests, partial or full lockdowns, travel limits and booster vaccines.

In Italy for example, the first European country to impose a nationwide lockdown in early 2020, gone are the days when people disinfected the supermarket shopping before it entered their homes, and the daily toll of cases and fatalities monopolized attention.