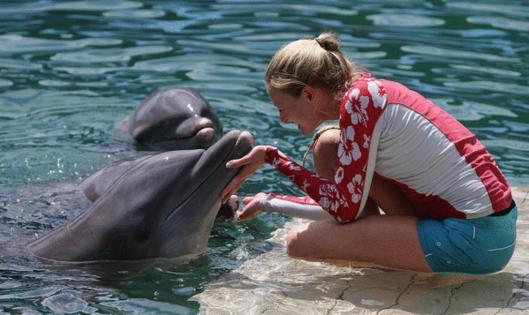 MIAMI — Some students at the University of Miami want the school to stop sending them on research field trips to the Miami Seaquarium after a damning federal report revealed that park managers fed spoiled food to marine animals and allowed bacteria to multiply in tanks, making manatees and dolphins sick, among other violations.

A group of undergraduate students stated a campaign last month asking the school to cut ties with the marine park. The campaign, built around a petition on Change.org, is part of a political science class assignment on activism. It hasn’t generated much traction, however, attracting only 209 signatures since it was posted a month ago.

Organizers said the campaign reflects frustration by some undergraduate students at the University of Miami Rosenstiel School of Marine and Atmospheric Science who are required to study animal behavior at the Seaquarium. Rosenstiel School students said they felt uncomfortable going on field trips to the Seaquarium, a facility that has been the target of numerous animal rights campaigns alleging mistreatment of dolphins and of Lolita the orca, for decades the park’s main attraction.

“We realized that many students at RSMAS were quite upset with this requirement to do work at the Seaquarium, so we joined forces with them to help with a campaign,” she said. “We believe this is a credibility issue for UM. We don’t want our university to be associated with an abusive marine park.”

Some Rosenstiel students said they must submit reports on dolphin and manatee behavior after spending a few hours observing the animals at the Seaquarium as part of required lab work in their freshman year.

The relationship between the university and the Seaquarium goes back many years, with marine science and veterinary students doing internships at the facility. The Rosenstiel School and the Seaquarium have a joint “Rescue a Reef” exhibit at the marine park showcasing coral conservation and restoration efforts in a 500-gallon tank.

For more than 30 years the Seaquarium was run by Arthur Hertz, a longtime UM Board of Trustees member who graduated in 1955 with a Bachelor of Business Administration. Hertz, who died in 2017 at 83, built a career at Wometco Enterprises, which owned the Seaquarium from 1960 until 2014. When the company was broken up and sold in the early 1980s, Hertz, who had risen through the ranks to become CEO, decided to keep the Seaquarium.

He tried for years to expand the facility. In 1991, Hertz told The Miami Herald the Seaquarium was “tired” and needed to be modernized. “If we’re going to retain it, we’ve got to rebuild,” he said at the time. But his attempts were thwarted by Key Biscayne residents, who battled the expansion. He ultimately sold the marine park in 2014 to Palace Entertainment, a unit of Madrid-based Parques Reunidos.

Palace found itself in the spotlight two months ago when public records showed an atypical string of deaths between March 2019 and April 2020. Five bottlenose dolphins and a baby California sea lion died — a high number for a park with just 25 dolphins before the deaths occurred.