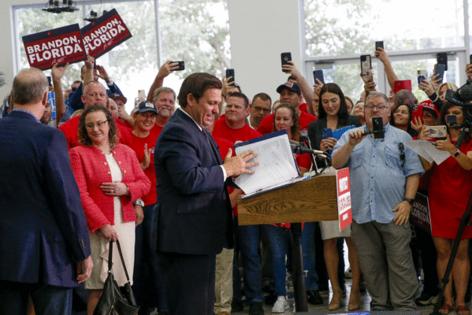 When the Republican-dominated Wyoming legislature met last month to fight federal COVID-19 vaccination rules, it drew a crowd. That first day, people opposed to the federal rules crammed into the House and Senate galleries, filled two overflow rooms and gathered on the steps of the Capitol.

State residents who traveled to Cheyenne fear taking a relatively new vaccine and don’t want to lose their jobs for refusing the shots, said Kristy Tyrney, the head of Wyoming Health Freedom, a grassroots group that rejects vaccine requirements.

“Having your job held over your head is very scary,” she said. She added that many attendees also want access to medicines such as ivermectin and hydroxychloroquine, which federal regulators say shouldn’t be used to treat the virus.

The scene in Wyoming played out across more than a dozen red-state legislatures in recent weeks as Republican lawmakers and governors pledged to fight President Joe Biden’s new immunization rules. Since September, at least 14 GOP-controlled legislatures have debated bills that would undermine vaccine mandates and passed at least 13 new laws, by Stateline’s count.

Many of the new anti-vaccine mandate laws are either symbolic or vulnerable to federal preemption, or in some cases both. Some have provisions that align with federal regulations, such as sections that say people can reject vaccinations for religious reasons.

The laws could, however, help rally the GOP base ahead of the 2022 midterms and have a chilling effect on businesses that want to go beyond federal requirements. The Walt Disney Company, for example, has temporarily paused its mandate that all its Florida workers get vaccinated, citing a new state law and litigation over the federal rules.

Biden earlier this fall announced plans to require federal workers, federal contractors and most health care workers to be vaccinated against COVID-19, and to require businesses with at least 100 employees to ensure workers are either vaccinated or regularly tested for the virus. The administration announced 95% of federal workers were in compliance by the Nov. 22 deadline.

Meanwhile, legislatures in recent weeks have reconvened in Florida, Kansas, Tennessee and Wyoming at least partly to fight vaccination mandates, while anti-mandate debates hijacked special session and end-of-session agendas in other red states.

In Wyoming, lawmakers filed at least 20 bills and passed only one, which sets aside $4 million to fund Republican Gov. Mark Gordon’s existing lawsuits against the federal rules. Idaho lawmakers considered 30 bills but passed only a joint resolution stating the legislature’s opposition to vaccine mandates.