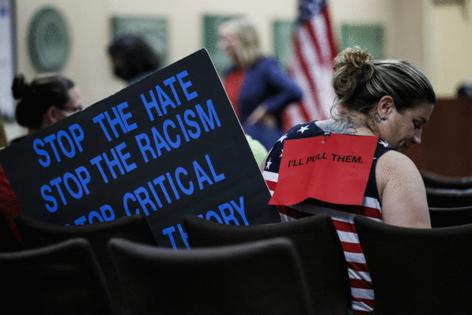 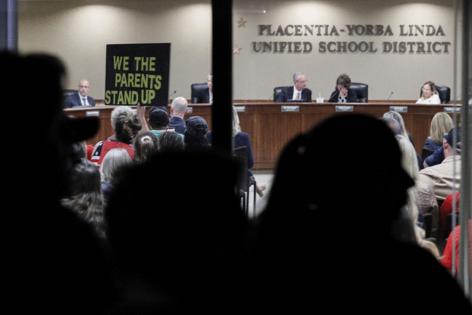 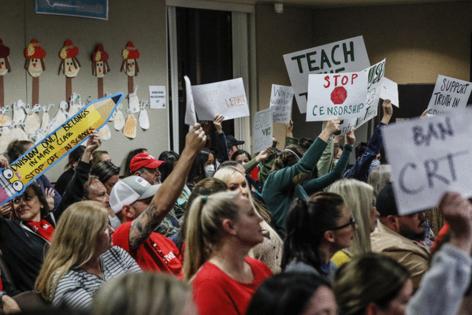 LOS ANGELES — Inside a wood-clad meeting room in Orange County, five school board members sat before a sign-waving, opinionated crowd. For more than three hours, the trustees listened, debated and asked questions as they tried to decide whether to ban classroom teaching on a hard-to-define topic not taught in their schools: critical race theory.

The board members of the Placentia-Yorba Linda Unified School District had even turned to the trusted pages of the Encyclopedia Britannica, copying the entry for critical race theory into a public resolution that could become the legal policy of the district.

"I don't think that this definition is really good," trustee Marilyn Anderson said after reading the dense entry. "I think it needs to be really specific. It needs to spell out the specific theories that we do not want taught in our district — like that the United States is fundamentally or systemically racist."

At the end of a long night, the board postponed the vote. But what emerged during their session revealed far more than angst over a "yes" or "no" vote on whether to ban critical race theory. Their meeting offered an up-close look at how an advanced academic concept has been transformed into a politicized slogan framing uncomfortable discussions about how to teach race, racism and equity in schools — and how the quest to define it inside a suburban school board meeting can be a minefield.

Critical race theory is a university-level academic lens for examining how racial inequality and racism are historically embedded in legal systems, policies and institutions in America and is not generally taught in K-12 schools. Yet Republicans have seized on it as a wedge issue painting white people as racist oppressors and people of color as the oppressed. Democrats largely see the conservative drive against critical race theory as racist dog-whistle politics that polarizes broader discussions about reckoning with America's past.

Against this backdrop, school board members and parents in suburban Placentia-Yorba Linda are trying to figure it all out for their kids.

Although ultimately designed to ban critical race theory, the district's 14-point resolution was touted as a way to foster a "safe and respectful environment for students." It said the district "stands by the commitment to teach a complete and accurate account of history while also supporting the cultural integrity of students."

Among the issues considered during the discussion were whether the district should promote "equity" or "equality"; whether to include the word "multiculturalism"; and whether it was appropriate to strive to "free students from the historical transgressions of the past."

The public comments at the meeting were nearly evenly split between those in favor and those opposed to what they believed critical race theory stands for. The vast majority of students who spoke, including students of color, opposed the ban and supported their ethnic studies class, currently an elective course in high school.

"I have learned that people like me can make history — something I never thought I would be able to learn within the American education system," one student told the board.