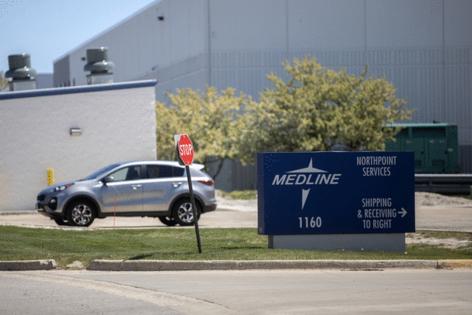 CHICAGO — After snubbing a federal right-to-know law for years, two Chicago-area companies could soon be forced to join competitors that make it relatively easy for Americans to determine how much cancer-causing ethylene oxide drifts into their communities.

The Biden administration is expected to decide by the end of the year whether Northfield-based Medline Industries and Oak Brook-based Sterigenics should file reports to the Toxics Release Inventory, an annual tally of industrial pollution ordered by Congress during the mid-1980s in response to a deadly chemical disaster.

A Medline facility in north suburban Waukegan and eight Sterigenics locations across the country are among 31 companies targeted by the U.S. Environmental Protection Agency because they emit ethylene oxide, also known as EtO, while fumigating medical equipment.

“EPA is committed to taking action to protect people from exposure to EtO, especially children, workers and residents in underserved and overburdened communities,” Michal Freedhoff, chief of the agency’s Office of Chemical Safety and Pollution Prevention, said in a statement announcing the impending policy.

Requiring greater transparency about EtO emissions is one of several regulatory changes under consideration by the Biden EPA after the Trump administration attempted to undermine career scientists at the agency, which in 2016 officially declared the chemical is far more dangerous than previously thought.

The Chicago Tribune first reported in May that Medline’s Waukegan plant hasn’t appeared in the public chemical inventory since the mid-2000s, even though the EPA later determined the facility has been responsible for some of the nation’s highest cancer risks from air pollution.

In a letter to Medline, Freedhoff noted that nearly 180,000 people live within 5 miles of the plant, including more than 10,000 children younger than 5 years old.

A 2019 state law prompted by earlier Tribune reporting required Medline to reduce EtO emissions to 150 pounds a year, down from 3,058 pounds reported to the Illinois EPA during 2014 in obscure documents that generally aren’t released to the public without a Freedom of Information Act request.

Community activists contend the latest permit doesn’t protect neighbors from harm. But regulators and company executives agree that new pollution-control equipment at the Waukegan plant has reduced cancer risks from ethylene oxide exposure to a level below what is considered acceptable by the EPA.

“We are supportive of the U.S. EPA’s new policy to include all EtO sterilization facilities in the TRI reporting requirements,” Jesse Greenberg, a Medline spokesman, said in an email.