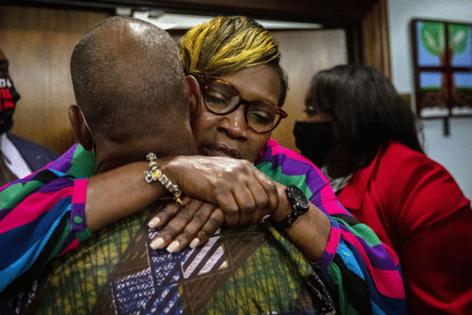 ATLANTA — The jury verdict that convicted three white men of killing Ahmaud Arbery as he ran through a coastal Georgia neighborhood brought an unusual reaction among state political leaders: a consensus that justice was at least partially served.

Unlike the outcome in last week’s trial of Kyle Rittenhouse, whose acquittal on five felony charges sparked a partisan clash, Georgia’s top politicians were unified in horror over Arbery’s death — and nearly unanimous in demands to make significant changes to state laws in response.

Almost as soon as footage of the fatal shooting was released last year, state politicians pressed for a renewed investigation and legislative action. Democrats who had long pushed for overhauls to outdated laws suddenly found a willing ear from state Republicans.

For months after the shooting, the three men who were convicted Wednesday of killing Arbery, who was Black, had walked free. It wasn’t until political pressure built on local officials — and the case was taken over by state investigators — that the trio was arrested and charged with the murder.

Pressure also intensified at the Capitol, as legislators returned to a pandemic-delayed 2020 session in the midst of racial justice protests inspired partly by Arbery’s death.

Legislators soon adopted hate-crimes legislation after nearly two decades of attempts to put a law back on the books. It increased the punishment for people who commit crimes against someone based on race, sexual orientation, religion or other characteristics.

When Gov. Brian Kemp signed the legislation into law, Democratic state Rep. Calvin Smyre declared it a “defining moment” in Georgia history. “Ahmaud Arbery’s death will not be in vain,” Smyre said.

It wasn’t the only major change that came after Arbery’s death. Soon after the hate-crimes law was passed, legislators held hearings on the repeal of the state’s citizen’s arrest law, a statute dating to the Civil War that was initially cited by a prosecutor to justify the shooting of Arbery.

The rules allowed residents to take law enforcement into their own hands if they witnessed a crime and the police weren’t around. Criminal justice experts said citizen’s arrest laws are too easily abused and no longer necessary with widespread law enforcement protection and 911 service.

Still, when Kemp announced he would roll back the “antiquated” law, it seemed destined for a drawn-out fight. One Senate Republican was seen dramatically shaking his head “no” as Kemp laid out his plan at the beginning of this year.