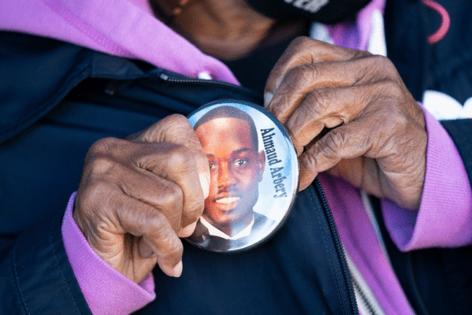 Hannah Joy Gebresilassie was playing with her twin 2-year-old nephews at a metro Atlanta park when she heard the news.

Watching them laugh and take turns going down the slide, the community activist was glad that they were oblivious to what was happening a little more than four hours away in a packed Glynn County courtroom.

They were unaware that Arbery, a 25-year-old unarmed Black man, had been shot and killed as he jogged through a Brunswick area neighborhood last year. Unaware that the three white men charged in the February 2020 shooting death all had just been convicted.

As she watched them, two young Black boys, she said the moment was bittersweet.

“This is literally showing us that we are not going to tolerate an innocent Black man’s life being stolen by racist individuals trying to play God,” Gebresilassie said about the verdict. “Even though all three of those men got justice, it is still hard to process. Because justice would have been Ahmaud Arbery, still being here as a Black man going through society. There is a lot more work to do in this nation, but this is one step in the right direction.”

On Wednesday, in what might have been one of the most polarizing cases in Georgia in decades, a jury of 11 whites and one Black man, convicted Travis McMichael of malice murder for the shooting death of Arbery in February 2020. McMichael was also convicted of felony murder, along with his father Gregory McMichael and William “Roddie” Bryant.

Across Georgia, news of the verdict hit quick, as religious, political and civil rights leaders weighed in on what some of them called surprising while others saw the jury’s decision as a sign of progress and change.

“The pain and loss resulting from Ahmaud Arbery’s murder can never be rectified, but this is a significant moment of accountability and justice,” said Jonathan Greenblatt, CEO of the Anti-Defamation League. “The men who murdered Mr. Arbery were tried and found guilty of the crime, sending a resounding message across Georgia and the United States that racial violence — especially that committed under the false guise of vigilantism — is unacceptable. Mr. Arbery did not die in vain.”

The 25-year-old Arbery’s death fueled numerous protests in Brunswick and elsewhere and became international news. NBA star LeBron James and filmmaker Ava DuVernay expressed outrage about the case. When lawyers for the Arbery family had to make a probable cause hearing, rapper and businessman Jay-Z chartered a jet to get them to Georgia.

Following last week’s acquittal of Kyle Rittenhouse in a similarly polarizing case in Wisconsin, this case was followed closely. After the verdict, President Biden, Vice President Harris and a host of others, including Atlanta Mayor Keisha Lance Bottoms chimed in with opinions.