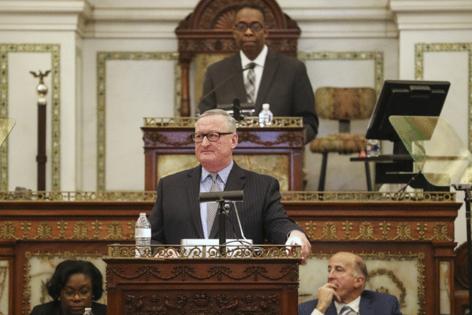 As Philadelphia approaches a record for homicides, Mayor Jim Kenney on Wednesday said the city is doing what it can to slow the bloodshed but is stymied by state law that keeps the city from enforcing stricter gun laws.

“There are people making money selling these guns, making these guns,” he said, “and the legislature, they don’t care about people getting killed.”

Kenney spoke during a news conference at City Hall alongside police brass, federal law enforcement officials, representatives from the District Attorney’s Office, and a handful of lawmakers from City Council and the state General Assembly. The administration convened the gathering as the city comes close to seeing more than 500 people killed this year, the most in modern history.

As of Wednesday morning, the city had 499 homicides, according to police statistics. That is the same amount of killings recorded in all of 2020, one of the deadliest years in Philadelphia history. The only year the city recorded 500 killings was 1990, at the height of the crack-cocaine epidemic and the turf wars it fueled.

The figures have been driven largely by gun violence, which surged in 2020 amid the pandemic in Philadelphia and in large swaths of the country. Other violent crime, including assaults committed without a gun, was already at decades-long lows and has continued to trend downward since 2019.

In taking aim at the state, Kenney was repeating his frequent criticism of a concept in state law known as preemption, which generally prohibits municipalities from passing laws that limit access to firearms. His administration last year sued the state, seeking to overturn the rule, and the case remains unresolved.

If the city was not operating under preemption, Kenney said, officials would enforce regulations that target “straw purchasers,” or people who legally purchase firearms and then illegally sell them to others. Those include setting limits on how many guns someone can buy within city limits during a specific time period.

City Council President Darrell L. Clarke said the city could also crack down on so-called ghost guns, which are partially assembled firearms that can be purchased without a background check. They are untraceable by law enforcement.

Republican leaders in Harrisburg have stressed that preemption is in the state constitution and has been upheld by courts.

Jason Gottesman, a spokesperson for House Republicans, said it’s a “gross fabrication” to suggest the state is keeping Philadelphia from adequately responding to the crisis. He said the city can enforce gun laws already on the books, and said city leaders — specifically reform-minded District Attorney Larry Krasner — don’t “seem to be sending the right message to perpetrators of violent crime.”

She said they bear responsibility for the proliferation of ghost guns, and she questioned why lawmakers this month passed a Republican-backed bill that would allow for open carry without a permit and was opposed by some law enforcement groups. Gov. Tom Wolf, a Democrat, said he will veto the carry measure.

Kenney emphasized the city has taken other steps to address the crisis. The city set aside $155 million this year for community-based programming and neighborhood revitalization, including $22 million in grants to grassroots organizations.

The mayor said he’s confident the city will see less violence in 2022, noting that the court system is making its way through a backlog of cases that built up amid the pandemic. And he said police are on pace to seize about 6,000 guns and have arrested more than 2,200 people this year on illegal weapons charges, a record number.

Police Commissioner Danielle Outlaw said the department is “constantly reassessing” its strategies based on what’s driving shootings. She said police have placed a greater emphasis this year on partnering with community organizations that work with children, groups that are addressing domestic violence, and other law enforcement agencies targeting narcotics.

Kenney said the city’s strategies will take time to make a difference.

“This is a process that’s going to be a little time to resolve,” he said. “There’s no magic wand for this.”

MINNEAPOLIS — The prosecution in the Kimberly Potter manslaughter trial alleged in its opening statement Wednesday that the former Brooklyn Center police officer had her gun drawn on Daunte Wright for more than five ...Read More

The undated images, which were retrieved from CDs ...Read More

More than 300 writers and artists worldwide urged the Cuban government to immediately release the artists detained after the July 11 protests, in a letter published Wednesday with the support of PEN International, PEN ...Read More

Had he made it to Christmas week, Alexander would have turned 13. Instead, the boy was shot to death ...Read More

LOS ANGELES — Just as the omicron variant is making its way into California, tens of thousands of college students are preparing to travel away from their relative campus bubbles for winter break, a worrisome rite of ...Read More