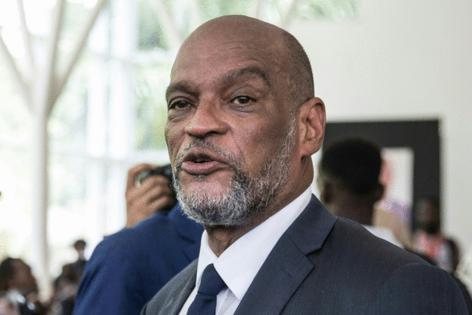 After four months and weeks of speculation, Haiti has a new ministerial Cabinet taking charge of its day-to-day governance amid an alarming spike in violent clashes by gangs who are abducting people for ransom, blocking fuel distribution and carrying out attacks on neighborhoods.

Interim Prime Minister Ariel Henry, who took charge of the country following a power struggle after the July 7 assassination of President Jovenel Moïse, on Wednesday announced his new government.

The list includes some familiar faces like former Education Minister Nesmy Manigat and Health Minister Alix Larsen, who will once more resume the roles they previously held in other administrations, and new faces like Justice Minister Berto Dorce. Henry also replaced Foreign Minister Claude Joseph with Jean Victor Geneus, a former Haiti ambassador to the Bahamas.

The formation of the new Cabinet had been a source of intense negotiations with members of the radical opposition known as the Democratic and Popular Sector writing to Henry on Wednesday morning requesting to see the configuration of the new ministerial Cabinet before its official publication in the country’s gazette. The group, which had agreed to support a Sept. 11 political agreement being touted by Henry, reminded Henry that they would not participate “in a government dominated by those who have destroyed the country for the past 10 years.”

The reference was related to supporters of Moïse and former President Michel Martelly and their Haitian Tèt Kale Party, or PHTK as it’s known, which made up the bulk of Henry’s previous Cabinet.

A neurosurgeon, Henry, 74, has faced a rash of criticism as armed gangs challenge his rule amid a worsening economic and political crisis that has pushed the country to the brink of complete collapse. The catastrophic situation has forced those with means to flee to the neighboring Dominican Republic and those without to take to the high seas.

In response to the continual uncertainty, widespread insecurity and recent fuel shortage, citizens of both Canada and the United States have been urged to leave. The warnings come as 14 Americans and a Canadian remain hostages after being abducted at gunpoint on Oct. 16 by an armed gang east of Port-au-Prince.

On Sunday, two of the hostages, who are missionaries with Ohio-based Christian Aid Ministries, were released on humanitarian grounds after one of them fell ill. But the others remain in captivity more than a month later.

In a statement, the medical aid group Doctors Without Borders/Médecins Sans Frontières called the insecurity in Port-au-Prince “unbearbale.”

The armed clashes and attacks on neighborhoods that are ongoing have led to people being gunned down, and homes being burned and pillaged. A recent fuel shortage brought about by gang tensions over the port led to reduced access to health care, and the closure of schools, businesses and even hospitals. At least 19,000 Haitians have been displaced by the violence and armed clashes since June, the United Nations has said.

“There are currently about eight informal displacement sites in Port-au-Prince in schools, stadiums and churches. The unsanitary conditions and overcrowding in these sites pose significant risks to people’s physical and mental health and increase existing vulnerabilities,” MSF said. “Some women and girls have reported sexual violence, harassment and physical violence in the sites, where they lack privacy and safe spaces.”

Despite its own efforts to provide potable water and health services through mobile clinics, there is an urgent need, the medical aid group said, for more humanitarian support to displaced people, including food, water, sanitation services and permanent shelter.

The multiple crises have raised questions about whether Henry, who named the new Cabinet as part of a political agreement he had been touting, will be able to usher in a new constitution and general elections next year as promised.

Among Henry’s most vocal critics are members of civil society supporting an alternative road map for getting Haiti out of its current crisis. Under their competing proposal, Haiti would enter into a two-year transition with a National Transitional Council overseeing the selection of a president and prime minister on the basis of certain criteria.

The council would be made up of representatives of different social and political sectors such as women and peasant organizations, human rights and private organizations, to name a few. Widely known as the Montana agreement after it was signed at the Montana hotel on Aug. 30, it has the backing of at least 40 political parties and more than 300 civil society organizations, and some members of the U.S. Congress.

WASHINGTON — The Senate on Tuesday voted against a path forward for a resolution that would have banned a proposed weapons sale to Saudi Arabia. The Biden administration pushed for the sale, arguing that the arms are “...Read More

The third accuser to take the stand against Maxwell �...Read More

After the Senate was unable to...Read More