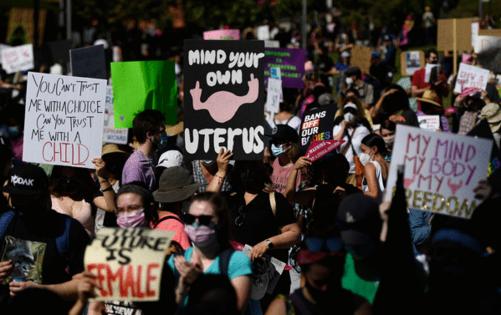 If the court sides with Mississippi to gut abortion protections set forth by its 1973 decision in Roe v. Wade, states could ban the procedure to end pregnancy. Mississippi’s 2018 law was blocked by a judge before it could go into effect.

Roe v. Wade and the 1992-case Planned Parenthood v. Casey affirmed that states could regulate, but not bar, abortions before fetal viability. Viability is when a fetus could likely survive outside of the womb, usually around 24 weeks of pregnancy.

California law allows people to have an abortion before a fetus reaches viability without restriction. After that, an individual can have an abortion if they and their doctor feel their health or life is in danger. California’s constitution protects the right to privacy, including over a person’s decision to have an abortion. More reproductive privacy protections have been added since.

People in California seeking abortions would still be able to get them if the Supreme Court, which will likely release its decision on the Mississippi case in June, overturns Roe v. Wade.

That has led experts to predict that California would become a popular abortion destination if other states were to ban them.

Lisa Matsubara, general counsel and vice president of policy at Planned Parenthood Affiliates of California, said it is very possible that the conservative-leaning court voids Roe v. Wade. The court allowed Texas to effectively ban abortions once cardiac activity is detectable, usually around six weeks, while it considers the law’s constitutionality.

Matsubara said that even if the court upholds Roe v. Wade this summer, some states plan to implement laws that mirror Texas’ law, which deputizes citizens to file lawsuits against people or places offering abortions after that six-week mark.

By putting citizens rather than law enforcement in charge of reporting abortions, the law takes enforcement of the six-week ban out of the hands of the state. The threat of a lawsuit might dissuade anyone aiding someone in seeking an abortion from doing so. Arkansas, Florida and South Dakota are among some of the states where Republican officials have suggested they might try to mimic the law.

Many of the states considering stricter abortion laws already restrict access to contraception and to gender-affirming health care for LGBTQ individuals, Matsubara said.

“I do think that it is imperative that policymakers in California really start thinking about what California needs to do to prepare for some of that increased need, including for those who are going to be traveling to California for care. I think it’s really important that we put the infrastructure in place now,” Matsubara said in an interview with The Sacramento Bee.

Without Roe v. Wade, 26 states are likely to ban abortion to some extent, the Guttmacher Institute predicts. Twenty-one already have some restrictions ready to go: 12 of those states have “trigger bans” that would bar abortion immediately if the court overturns Roe v. Wade.

California is an abortion destination

People already drive to California from out of state to have abortions.

But if the court lets states ban abortion entirely, California could see an almost 3,000% increase in people driving to the state to get one, according to an analysis published by the Guttmacher Institute, a reproductive health research and policy organization that supports abortion access.

Most of those travelers would be from Arizona, the institute predicted.

Nevada and Washington would also see an increase in people driving to obtain abortions if the court allows states to ban them, but not to the same extent, per the same analysis.

California could see a 12% increase in travelers seeking an abortion if the court allows states to bar abortions after 20 weeks of pregnancy and a 13% increase for a 15-week ban, according to the institute.

Matsubara said that California already is working to improve abortion access to California residents in underserved and rural communities while embracing Gov. Gavin Newsom’s declaration that the state is a “reproductive freedom state.”

One of those measures includes trying to adjust to the need for distributing pregnancy-ending medication through telemedicine, a need highlighted by the pandemic.

Newsom recently signed laws to heighten privacy around abortions by requiring information on those and similar procedures to be sent to a patient exclusively, rather than to additional members on a health plan, such as to guardians of minors. Another law penalizes individuals who post personal information about other people who work for or go to reproductive health centers.

Planned Parenthood Affiliates of California and other similar organizations created the California Future of Abortion Council advisory group to advise the state and serve as a model for others on anticipating and addressing challenges to reproductive and sexual health care. The group is expected to release some findings next month.

Almost two-thirds of Americans think the court should uphold the precedent, according to a Washington Post-ABC News poll conducted this month. About three-quarters of respondents said that the decision about an abortion should be between a person and their doctor, rather than regulated by state laws.

Californians are more supportive of abortion access than the general population: 77% of adults in California do not want Roe v. Wade overturned, according to a Public Policy Institute of California poll conducted in July.

But more people are against some measures set by the legal precedent than those polls show, said John Gerardi, the executive director of Fresno-nonprofit Right to Life of Central California.

He noted that many people do not generally support third-trimester abortions, which are allowed under California law if the pregnant person’s health or life is at risk, without clearly narrowing what “health” means.

“If Roe is overturned decisively, I think there will be happiness among the conservative community, but unfortunately, kind of a mostly theoretical happiness that positive things will be happening in places other than here,” he said of Valley residents.

Another bill that was considered in the state Legislature this summer, and will likely return, would get rid of out-of-pocket costs for abortions by preventing most private health plans overseen by the state from putting co-pays or deductibles on the procedure.

MINNEAPOLIS — The prosecution in the Kimberly Potter manslaughter trial alleged in its opening statement Wednesday that the former Brooklyn Center police officer had her gun drawn on Daunte Wright for more than five ...Read More

The undated images, which were retrieved from CDs ...Read More

More than 300 writers and artists worldwide urged the Cuban government to immediately release the artists detained after the July 11 protests, in a letter published Wednesday with the support of PEN International, PEN ...Read More

Had he made it to Christmas week, Alexander would have turned 13. Instead, the boy was shot to death ...Read More

LOS ANGELES — Just as the omicron variant is making its way into California, tens of thousands of college students are preparing to travel away from their relative campus bubbles for winter break, a worrisome rite of ...Read More