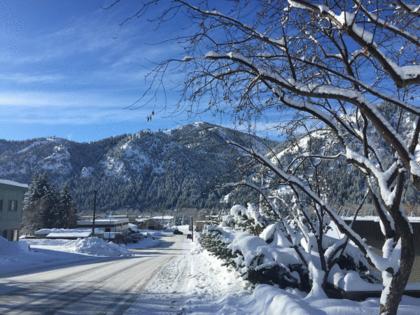 BOISE, Idaho — According to health experts and data, Idaho has one of the lowest vaccination rates for COVID-19 in the country. Current Centers for Disease Control and Prevention numbers show that about 43% of the state's total population is vaccinated, higher than only West Virginia.

But one Idaho county is a major outlier from the state's low rates. The statewide percentage of eligible Idahoans fully vaccinated is only about 54%, according to the Idaho Department of Health and Welfare, but Blaine County's vaccination rate for the same group is 86.8%.

Local doctors and health district officials said the high vaccination rate can be attributed in part to the county's demographics, such as age and political affiliation, which have been shown nationwide to have ties to vaccine uptake. But experts said they think there's more at play.

"Really it's a community effort up there," said Brianna Bodily, spokesperson for South Central Public Health District. "They felt the pains of the pandemic early on. They learned how to come together to fight."

Blaine County is an Idaho anomaly in a few ways that may have influenced its vaccination rate. It's the most politically left-leaning county in the state — a factor that has been linked with higher vaccine uptake. It's also home to some of Idaho's wealthiest residents (and a large wealth gap). Research has shown that wealthier people are more likely to be vaccinated, often because of improved access to health care.

Bodily also said the county has a larger population of people 65 or older than other Idaho counties. That demographic has been the most apt to embrace the COVID-19 vaccine, as it's also one of the demographics most at risk from the disease. Across Idaho, 78.7% of people 65 and older have been vaccinated, according to IDHW. In the same group in Blaine County, 99.9% of people are vaccinated, according to CDC data.

In stark contrast to Blaine County's current vaccination rate, the popular tourist destination, home to Sun Valley ski resort and the town of Ketchum, was known as a COVID-19 hot spot early on in the pandemic. The surge of cases meant the small county had one of the highest case rates in the world for some time.

Like Bodily, Dr. Terry O'Connor, an emergency physician at St. Luke's Wood River, thinks enduring that early scare drew the community together and paved the way for increased vaccine uptake.

"Everybody was scared initially because there was such little information (on COVID) and ... there was a real dearth of misinformation, actually," O'Connor said in a video interview. "(People) just turned to trusted community members who happened to be physicians."

O'Connor said he thinks that early encounter with COVID-19, which overwhelmed the local hospital for a few weeks, established a sense of trust between medical leaders and the community. It helped that the small county, which is home to roughly 23,000 people, according to 2019 census data, was already quite tight-knit.

"We are a small community and there's common values that extend beyond what is easy to talk about and traditional political divides," O'Connor said. "I think Blaine County and the communities (here) have always prided themselves on the fact that we always kind of know a little bit about one another and we look out for one another."

But not all small communities have fared the same. Some of Idaho's less populated counties have some of its lowest vaccine rates. Idaho, Boise and Owyhee counties each have far fewer residents than Blaine County, and have some of the state's lowest vaccination rates — at 30%, 31% and 35% of eligible residents vaccinated, respectively.

Bodily said local leaders also played a role in Blaine County's vaccine response. Blaine was one of the first places in Idaho where officials implemented mask mandates and it's the only area in Idaho to still have them. (In September, officials at the county level and in multiple towns reinstated the mandates as Idaho entered crisis standards of care.) Local officials have touted research and encouraged vaccines where other Idaho leaders have shared misinformation about COVID and vaccines.

"In some counties in Idaho, what we see is a lot of confusion about whether or not the vaccine is safe," Bodily said. "When leaders question the validity or safety of a vaccine or health care process, the natural consequence would be that individuals who look to them for guidance would also question it. In Blaine County, most elected leaders and thought leaders supported public health (messaging)."

Community members have also continued to advocate for COVID outreach, Bodily said. They've organized mobile vaccine clinics and identified areas of the community where vaccines haven't been been as easy to access or as readily embraced.

"Even with such a high vaccine rate, we're still talking to community members that say, 'This is an area that needs better access. How can we provide better access?'" she said.

O'Connor emphasized that there are still communities in Blaine County with vaccination rates that mirror the rest of Idaho's.

"Those are more vulnerable patients in a lot of ways, so we're definitely not out of the woods," O'Connor said.

Officials are hopeful that Blaine County's community effort can serve as a blueprint to boost vaccination rates in Idaho, but Bodily said it won't be simple.

"Some of the other things we can't replicate — their demographics, the unfortunate experience they had at the early part of pandemic," she said.

Packed bars in San Francisco. Popular hot yoga classes in Boston. Signs are mounting that many Americans in highly vaccinated places are grasping for a near-normal life, even as the most contagious COVID-19 surge yet ...Read More

Police did not specify where they recovered the drugs, but the ...Read More

The young NYPD officer critically wounded by a gunman who killed his partner in Harlem is being transferred to another hospital as he continues to fight for his life Sunday.

Officer Wilbert Mora, 27, was scheduled to be ...Read More

Thailand is ramping up the rollout of fourth COVID-19 shots to residents in its tourism-dependent regions as the nation gears up for border reopening next month.

French President Emmanuel Macron’s approval rating has stumbled less than three months before the first round of the country’s election.

Macron’s approval rating fell to 37% in January from 41% a month earlier, ...Read More

LOS ANGELES — Four people were killed and one person was wounded in a shooting at a home in Inglewood early Sunday, in what the mayor called the worst act of violence in the city in years.