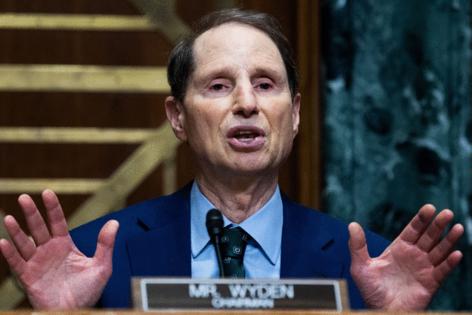 WASHINGTON — Three key senators released legislation that would require some U.S. companies to pay a minimum 15% rate on profits they report to their corporate shareholders, in lawmakers’ latest bid to find consensus behind revenue-raising measures to fund President Joe Biden’s economic agenda.

The proposal, sponsored by Senate Finance Committee Chairman Ron Wyden and Sens. Elizabeth Warren and Angus King, would require that companies that report more than $1 billion in profits to shareholders pay at least a 15% tax rate — even if they qualify for lots of tax breaks.

Democrats are planning to use this as an alternative to raising the regular corporate income tax, after opposition to such a move from Sen. Kyrsten Sinema. That rate would stay at 21%.

The new levy would raise $300 billion to $400 billion over 10 years, according to King, an independent who caucuses with Democrats. He also said at a briefing on the proposal that the proposal would “dovetail” with the Biden administration’s backing of a global corporate minimum tax of 15%.

“We better take on tax avoidance first because that is something that is going to bring us core support among our colleagues.” Wyden said at the same briefing.

Warren said the plan is approved by the White House and Treasury. She told reporters, “This is, in effect, the tax on companies like Amazon that report $10 billion in profits to their shareholders, to the public, set their CEO pay based on that and then turn around to the IRS and say hey, thanks to all the loopholes, they plan to pay nothing in taxes.”

This minimum tax would apply to about 200 companies that don’t pay a high-enough rate under the regular corporate-tax system, according to a summary of the plan. It could raise hundreds of billions of dollars of tax revenue over a decade, the summary said.

At a Tuesday lunch meeting of Senate Democrats, the idea got major support within the caucus, according to one participant. Sinema also released a statement backing the idea Tuesday evening. The Biden administration had proposed a similar plan earlier this year.

The corporate minimum tax represents a seismic shift from how corporate taxes are generally computed, which is based on their income minus credits and deductions. Instead, this levy would be computed using a separate accounting method — the one used for financial statements — to compute profits and apply a 15% tax.

The proposal would require companies that can avail themselves of lots of credits and deductions to still pay a base level to the Internal Revenue Service. The idea has gained popularity in Democratic circles after companies such as Amazon.com Inc., Nike Inc. and Netflix Inc. have been able to avoid paying any federal income taxes in recent years because they had so many tax breaks to offset their liabilities.

The legislation also addresses one of the major criticisms of minimum taxes — that they prevent companies from taking tax credits for things that Congress wants to encourage. The legislation would preserve the value of research and development, clean energy and housing tax credits, according to a summary of the plan. The bill also allows credits for taxes paid to other countries and give corporations some flexibility to carry businesses losses to a future year.

The proposal comes as Democrats are struggling to get the requisite support to pass their legislation with slim margins in both chambers. Wyden said he plans to release a tax on the unrealized gains of billionaires on Tuesday evening, though that plan has been criticized for being too complicated and potentially unconstitutional. Sen. Joe Manchin, a West Virginia Democrat, also said on Tuesday he opposes a plan to require banks to report account data to the IRS to help find tax evaders.

The proposal is separate from the 15% global minimum tax that Treasury Secretary Janet Yellen brokered with almost 140 countries earlier this year. That requires companies worldwide to pay at least a 15% rate no matter where they operate. Democrats are also planning to include language to implement that change in the tax and spending bill.