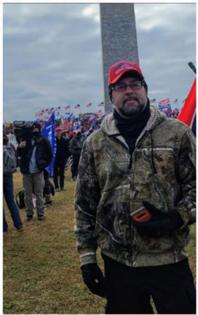 COLUMBIA, S.C. — A South Carolina man arrested by the FBI in connection with the Jan. 6 Capitol riots has rejected an initial plea offer from federal prosecutors.

William “Robbie” Norwood III, who attended his hearing virtually Tuesday afternoon, is for the present choosing to go to trial, said his lawyer, Peter Cooper.

“It looks at this stage like the trial side,” Cooper told U.S. Judge Emmet Sullivan. “Obviously, things could change down the road.”

Norwood, of Greer, in the Upstate region, was arrested in February and charged with knowingly entering or remaining in a restricted building without lawful authority, violent and disorderly conduct on Capitol grounds, obstruction of justice and theft of government property.

He stole a body armor vest and helmet belonging to the U.S. Capitol Police, according to a July 28 indictment in his case. They had a combined value of less than $1,000, the indictment said.

Assistant U.S. Attorney Hava Mirell said a plea agreement was offered to Norwood Oct. 24. Its contents were not disclosed.

Typically a government plea offer allows a defendant to plead guilty to one of several charges in an indictment or criminal complaint in return for dropping the other charges and having prosecutors recommend a light sentence or perhaps probation.

Mirell told the judge that in all the hundreds of criminal cases against alleged rioters, prosecutors have gathered and made available to defense lawyers more than 16,000 Capitol-area surveillance videos, including Secret Service video footage, police radio transmissions and Capitol Police body camera footage.

Prosecutors have also provided maps of the Capitol keyed to areas seen in the videotapes, she said.

Not all of that evidence trove pertains to Norwood. His attorney has been provided with specific digital evidence “related specifically to” Norwood so that his lawyer doesn’t have to search through “thousands and thousands of hours” of video, Mirell said. An electronic data bank of the government’s video evidence has been set up and is available to defense lawyers, she added.