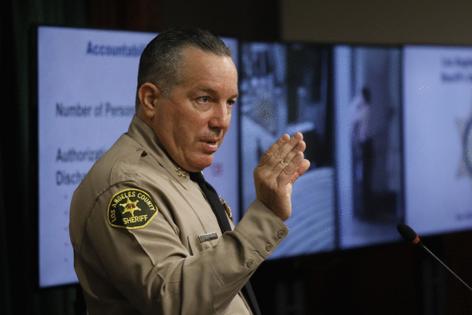 LOS ANGELES — A federal judge on Tuesday ordered Los Angeles County Sheriff Alex Villanueva to testify under oath in a lawsuit brought by Vanessa Bryant alleging that deputies shared gruesome photos of the crash scene where her husband, daughter and seven others died.

Lawyers for L.A. County sought to block Villanueva’s testimony, arguing that he doesn’t have any relevant information that Bryant’s attorneys can’t obtain elsewhere. Heads of government agencies are not typically subjected to depositions because of the potential for abuse and harassment that could get in the way of them performing their duties.

But U.S. Magistrate Judge Charles F. Eick knocked down the county’s argument, saying that Villanueva, along with L.A. County Fire Chief Daryl Osby, both appear to have “unique firsthand, nonrepetitive knowledge” relevant to the case. The judge limited each deposition to four hours.

Skip Miller, an attorney representing L.A. County, said he disagreed with the court’s decision but will make both Villanueva and Osby available.

“Their testimony will not change the fact that there is no evidence any photos taken by County first responders have ever been publicly disseminated,” Miller said in a statement.

Bryant sued L.A. County last year, alleging that she and her family suffered severe emotional distress after learning that deputies shared crash photos. Citizens complained that one deputy showed the photos at a bar in Norwalk and that a firefighter showed photos to a group of off-duty firefighters and their partners while having cocktails at an awards ceremony at a Hilton hotel, her attorneys said in court filings.

In a deposition earlier this month, Bryant testified that she had implored Villanueva to make sure no one took photos of her husband‘s and daughter’s remains.

“I said, If you can’t bring my husband and baby back, please make sure no one takes photographs of them. Please secure the area,” Bryant recalled saying at the sheriff’s station.

Villanueva assured her he would secure the area, prompting Bryant to make a more direct and urgent plea.