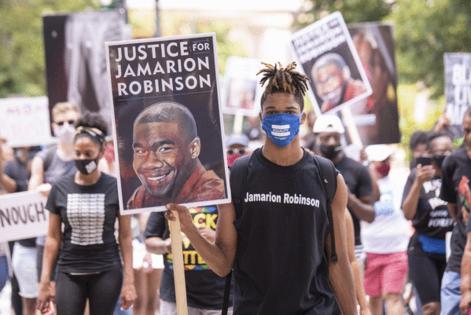 The Fulton County, Georgia, grand jury on Tuesday indicted two officers in the 2016 death of Jamarion Robinson, who was shot 76 times during a law enforcement raid on his girlfriend’s East Point apartment.

In addition to two counts of felony murder, Eric A. Heinze and Kristopher L. Hutchens were each indicted on six other counts: aggravated assault, burglary and two counts each of making false statements and violation of oath by a public officer.

On July 28, 2016, Robinson was inside the apartment when a fugitive task force made up of local law enforcement and federal authorities arrived. At the time, a U.S. Marshals Service spokesman said officers were attempting to serve warrants on Robinson from Atlanta police and Gwinnett County police.

According to East Point police, Robinson fired a shot at officers, who returned gunfire. Robinson was shot 76 times and died. He was 26.

Robinson’s family has said he suffered from mental illness. His mother, Monteria Robinson, has never stopped fighting for her son, telling The Atlanta Journal-Constitution in 2020 that former Fulton District Attorney Paul Howard “failed my family” after promising to indict the officers involved.

Howard said the investigation was hamstrung by the refusal of officers to cooperate and the absence of body camera footage.

“My son’s body is all the body cam you need,” Robinson said. “I wake up every day with anxiety. I’ve been in fight mode ever since my son was killed. I want closure.”

But when Howard lost his position to Fani Willis, the new DA promised swifter action. In May, Willis vowed to quickly have resolutions on police shooting cases such as Robinson’s.