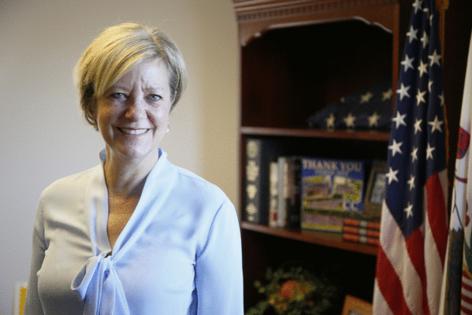 CHICAGO — The national furor over alleged voter fraud has come to DuPage County, with a group fronted by Republican politician Jeanne Ives claiming that more than 1,000 people voted in the November 2020 election using DuPage addresses where they no longer lived.

Ives said her organization, Breakthrough Ideas, compared voter records against the U.S. Postal Service’s national change of address database and found that 1,343 people who gave notice that they had moved prior to Election Day ended up voting from their old addresses.

Though she said her group’s research isn’t meant to overturn last year’s results, in which Democrats solidified their ascendancy of the former Republican stronghold, she suggested the alleged discrepancy might have made the difference in several close races.

“Our investigation shows a lack of coherent procedures in the (DuPage County Clerk’s) office, sloppiness in maintaining voter data lists and outright negligence in assuring we have fair elections in DuPage County,” she said at a news conference Friday.

Ives, a former Illinois state representative who lost a Republican primary race for governor in 2018 and a congressional election last year, said she had turned the group’s findings over to county prosecutors “as voting from an address that is not your lawful place of residence constitutes an illegal, fraudulent vote.”

Adam Johnson, spokesman for DuPage County Clerk Jean Kaczmarek, said in a statement the office follows federal law in maintaining its voter rolls, using everything from death certificates to undeliverable mail to biannual change of address notifications to keep the list up to date.

He said the one voter Ives highlighted at her news conference — a person who allegedly moved to Florida from Hinsdale but still listed the old address while voting by mail — notified the clerk’s office months before the election that they had moved elsewhere within DuPage County and cast the proper ballot.

The Chicago Tribune could not reach the voter for comment.

Voting rights advocates say numerous groups have used change of address databases to question voter eligibility, a tactic they said has been driven by the ready accessibility of the information.

“This is obviously an easy data point,” said Spencer Scharff, senior adviser to the States United Democracy Center, which advocates for voter protection. “It’s easy to have a headline and difficult to understand the nuances.”