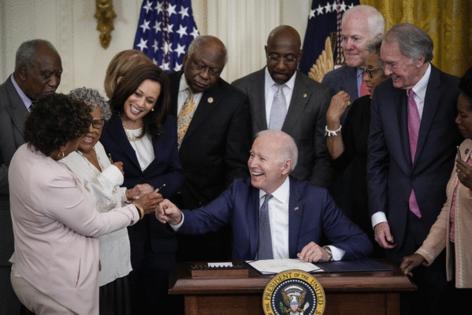 FORT WORTH, Texas — Fort Worth will soon become home to the National Juneteenth Museum, which will not only contain and educate about the history behind the holiday, but will also host seminars and lectures about freedom and its historical perspectives.

Sable Brands, a Fort Worth-based public affairs and marketing firm, announced Tuesday that the museum will be built as "part of a mixed-use development that will help revitalize the city's Historic Southside neighborhood," according to a news release.

Juneteenth, observed on June 19, commemorates the abolition of slavery in the United States following the Civil War.

"To have lived long enough to see my walking and talking make an impact is one thing, but to know that a state of the art museum that will house the actual pen that President Biden used to sign the bill and many other exhibits is coming to pass as well ... I could do my holy dance again," said Fort Worth's Opal Lee, who was a key advocate in making Juneteenth a federal holiday this summer and is known as the grandmother of the holiday.

The museum will be built on land that currently houses Lee's existing Fort Worth Juneteenth Museum, which has operated at 901 E. Rosedale St. for about 20 years and was the production location in feature film "Miss Juneteenth."

"The museum will not be an expansion of the Juneteenth Museum that exists now as the current facility is limited in scale and has a Fort Worth-centric motif. Instead, it will be a new development with a national designation," a spokesperson from Sable Brands said. "The new museum will be the world's premier Juneteenth exhibit space and tourist destination."

The museum is still "months away from construction," which is expected to begin in spring 2022. The opening date is unknown, but is hoped to be sometime in 2023. The museum is expected to cost between $25 million and $30 million with funding through "various sources, including individual and corporate donors and government partners," the spokesperson said.

The new exhibits are expected to be run by a "collaboration of activists, researchers, historians and everyday people that understand the influence of history on the trajectory of the human experience," in hopes of educating guests on the experiences of slavery and oppression and the legacy of people who overcame those hardships, the news release said.

"Exploration of the richness of the American tapestry and global canvas is the ultimate goal of the museum's directors," the release added.

Lee, who's also the oldest living board member of the National Juneteenth Observance Foundation, has been advocating to make Juneteenth a federal holiday for years. In 2016, the 95-year-old originally from Marshall began Opal's Walk 2 DC, a 2.5-mile walk that metaphorically represented the 2.5 years it took for Texas slaves to learn that they were no longer enslaved.

Lee, who later gained more than 1.5 million online signatures to make Juneteenth a national holiday, was at the presidential signing on June 17 that declared Juneteenth a federal holiday.

Fort Worth Mayor Mattie Parker said in the release that she is excited to add to an already-renowned collection of world-class museums in the city. "For decades, Juneteenth has been part of the fabric of our city, and this museum is a welcome addition to its incredible legacy," Parker said.