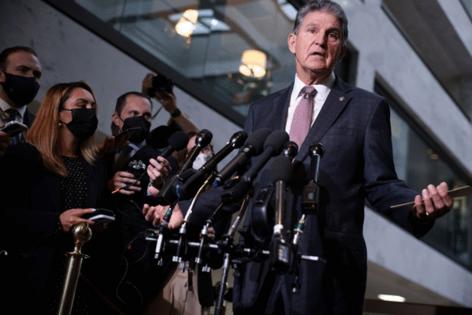 The United States may be urgently transitioning from its long reliance on fossil fuels to generate electricity, but West Virginia and its senior senator, Democrat Joe Manchin III, appear to be in no rush.

The Mountain State trails the rest of the nation, including other coal producers, in decarbonizing its electricity supply. In 2000, 98.2% of its electricity generation came from coal, according to Energy Information Administration data. That figure dropped to 96.7% in 2010 and 88.48% today and remains the highest in the nation.

West Virginia is also the No. 2 producer of coal, behind Wyoming, and ranks fifth in natural gas production.

“You can’t make the case at all that transition is happening in West Virginia, because it’s just not,” James Van Nostrand, director of the Center for Energy and Sustainable Development at the West Virginia University College of Law, said by phone.

By comparison, the top coal producer, Wyoming, gets 80% of its power from coal. Kentucky gets 69%; North Dakota, 57%; Ohio, 37%; Minnesota, 25%; and Pennsylvania, 10%, and all are cutting their use of coal at faster rates than West Virginia.

Manchin, who chairs the Senate Energy and Natural Resources Committee, is invested in the coal industry and is a top recipient of campaign contributions from fossil fuel companies. He has expressed dismay at many of the clean energy elements in his party’s massive budget reconciliation proposal, which would put into effect President Joe Biden’s agenda for averting catastrophic climate change.

He’s particularly opposed to a provision called the Clean Electricity Performance Program, a $150 billion proposal meant to spur electric utilities into shutting down power plants that run on fossil energy sources by paying utilities that move swiftly to close power stations that run on fossil fuels and fining companies that don’t. Negotiations on the budget reconciliation program are continuing, and the provisions related to addressing climate change are not yet final.

“Makes no sense to me at all for us to take billions of dollars and pay utilities for what they’re going to do as the market transitions,” Manchin told CNN in a September interview. He made similar comments at a hearing and when talking to reporters last week.

“The only thing they want us to do is pay $150 billion for what’s already happening,” he told reporters. “We’ve transitioned.”

NEW YORK — Jurors in Ghislaine Maxwell’s sex-trafficking trial were shown video of the interior of Jeffrey Epstein’s Florida mansion as well as what prosecutors described as sexually suggestive photographs of very ...Read More