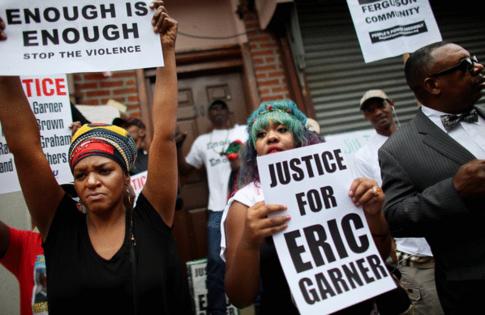 NEW YORK — A historic judicial inquiry into the city’s handling of Eric Garner’s death from a New York Police Department officer putting him in a banned chokehold began Monday more than seven years after his death helped spark a national racial justice movement.

Members of Garner’s family, who have long demanded accountability from city officials for the Staten Island father of six’s death, are hoping the summary inquiry will address outstanding questions about his July 17, 2014, arrest.

“This is trailblazing if you ask me,” Manhattan Supreme Court Justice Erika Edwards said Monday.

“We are looking into transparency about the death of Eric Garner.”

The petitioners say their main objective is to probe NYPD top brass on their role in Garner’s death and the ensuing investigation. Lawyers for the city fought doggedly to stop the inquest from happening and successfully argued against Mayor Bill de Blasio and former police Commissioner James O’Neill having to testify.

A summary judicial inquiry is allowed under a rarely cited section of the city charter that permits the public to demand a judicial inquest into possible violations or neglect by officials to bring about transparency and awareness.

Garner’s mother, Gwen Carr, and his sister Elisha Flagg-Garner, who are among the petitioners, attended the virtual hearing, which Carr had pleaded with Edwards to hold in person. Monday’s proceedings got off to a shaky start with a poor connection and several technical glitches delaying the proceeding’s start.

Bannon testified that he called NYPD Sgt. Danath Saminath to send officers to 200 Bay St. the afternoon Garner died because a large group was outside. The lieutenant said he believed the group was “indicative of the problems we’d been having” regarding quality-of life issues in the neighborhood.

A text message exchange between Bannon and Saminath, which drew gasps and protests from the audience at former Officer Daniel Pantaleo’s 2019 departmental trial, was then shown to the court. The pair texted after an ambulance took Garner to Richmond University Medical Center without a pulse.