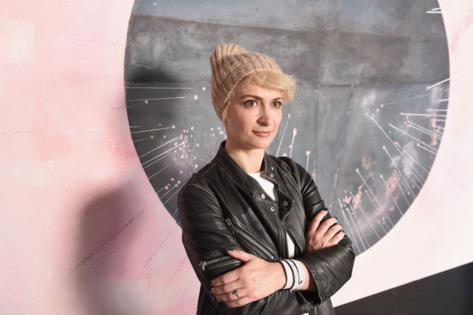 Standing before a somber crowd of some 300 film workers Sunday night, a display of floral wreaths and photos of cinematographer Halyna Hutchins behind him, IATSE international Vice President Michael Miller spoke to the mix of raw emotions many were feeling.

They gathered in a parking lot off Olive Street in Burbank to pay tribute to Hutchins, who was killed Thursday in a tragic accident on the set of the Alec Baldwin western “Rust” — and to vent their outrage.

“We’re here to mourn,” said Miller, who is also director of motion picture and television production. “But I’m afraid we are also gathered with some frustration and a little bit of anger. Anger that too often the rush to complete productions and the cutting of corners puts safety on the backburner and puts crew members at risk.”

Handing out black ribbons before the candlelight vigil began, set medic Margarita Velona held back tears as she spoke of the carelessness that had led to Hutchins’ needless death.

“I want to see safety,” she said. “This is our livelihood. Halyna was one of ours, and now a child has no mom, a husband doesn’t have a wife, parents don’t have child.”

The vigil, which followed a similar event held Saturday in Albuquerque, carried a disheartening sense of deja vu.

In 2014, hundreds of film workers held a candlelight vigil and march on Sunset Boulevard after the death of camera assistant Sarah Jones, who was struck by a freight train on a trestle in Georgia during the filming of “Midnight Rider.” Several other crew were injured.

At the time, Jones’ death was seen as a galvanizing moment for the film industry, prompting calls for greater attention to safety on film and television productions. Now, seven years later, Jones’ father Richard is heartbroken to see another life cut short by a senseless accident on a movie set.

“In a way, this kind of relives losing my daughter, and certainly my heart goes out to the family,” said Jones, who has continued to push for greater awareness and accountability for safety on sets through the Sarah Jones Film Foundation. “It’s just a carelessness that is taking place. If these people in charge just respect the human beings ... that they’re in charge of, I don’t see how they can be so reckless.”

Anguish in Hollywood over Hutchins’ death — exacerbated by reports of unrest on the set of “Rust” over working conditions and safety issues — comes at a moment when film crews are already on edge. This month, concerns over working conditions and long hours nearly sparked a walkout by the union representing film and television crews, the International Alliance of Theatrical Stage Employees.