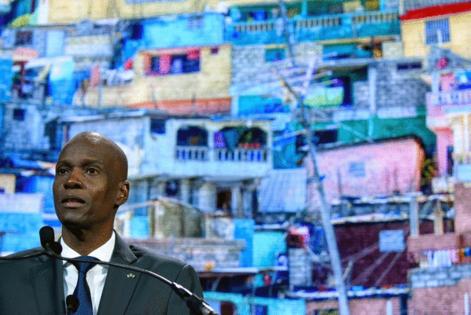 But this year the Oct. 17 holiday played out like political theater of all the woes afflicting the nation.

The acting prime minister was headed to speak at the monument marking the spot where Jean-Jacques Dessalines was assassinated just outside the capital, Port-au-Prince, but his convoy was turned back by gunfire.

In the absence of a government delegation, a police-officer-turned-gang-leader seized control of the ceremonies. Flanked by masked men with assault rifles, Jimmy Cherizier, who goes by the name “Barbecue,” strode to the monument in the white suit and collar of palace officialdom and roused the crowd.

“Today the time has come where they have the ports and the tax offices,” he shouted. “They are all millionaires. We are sleeping with pigs. This is how the system is.”

Like dozens of gang bosses in Haiti, Cherizier is a product of the country’s fractious politics, and as has been the case for more than a century, those politics are deeply entwined with U.S. policy.

Since U.S. Marines first occupied Haiti in 1915, Washington has put its thumb on the balance of power, supporting the brutal Duvalier dictatorships dating to the 1950s and more recently propping up center-right presidents with little popular support.

The latest round of violent upheaval in Haiti is inextricably linked to Jovenel Moise, who won the presidency in 2016 in flawed elections and then proceeded to strip away institutions, rule by decree and — even after constitutional experts said his term had expired — remain in power until he was assassinated in July.

Along the way, he enjoyed the support of both the Trump and Biden administrations.

Gangs that were connected to Moise have continued to operate with impunity, often using government vehicles; robbery, rape and kidnapping for ransom have reached epidemic levels.