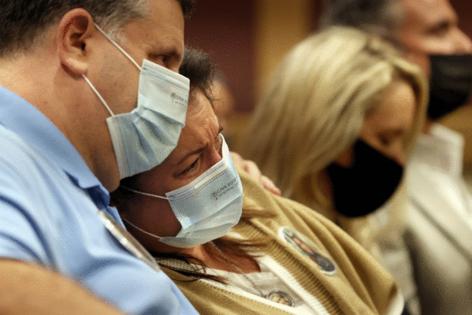 FORT LAUDERDALE, Fla. — The Parkland gunman’s guilty plea this week brought a swift end to the most predictable part of the legal drama surrounding the mass shooting at Marjory Stoneman Douglas High School, but it left far more business unfinished.

There are still legal arguments and hearings and a trial to determine whether Nikolas Cruz lives or dies. There are unresolved social and political arguments about how to prevent something like the Parkland massacre from happening again.

And there is still the site of the terror, the building the gunman entered on Valentine’s Day 2018, committed to killing. The hallways he stalked. The stained floors. The shattered windows. The vacant, sealed and silent reminder of South Florida’s darkest day.

For some, it is impossible to expect closure as long as Stoneman Douglas’ 1200 building stands.

“In a perverse way, it has come to be the only monument we have on school grounds, where all those children and selfless teachers and coaches passed on,” said Eric Edwards, whose three children attended the school, including one who is now a sophomore. “So it’s sacred ground, too, although I still view it with repulsion and can’t wait for it to come down and be replaced with a fitting tribute to those we lost, and to all that was lost on that day.”

The freshmen who attended Stoneman Douglas on the day of the shooting graduated in June. For the current student body, the mass shooting is not something they lived through.

“It’s just like it was in 2018,” said senior Logan Rubenstein, who became a Stoneman Douglas student six months after the shooting. “It’s kind of a time capsule that always reminds us of what happened.”

But there are still teachers who long to see the edifice removed.

“It needs to go,” said Melissa Falkowski, an English teacher who leads the school’s Faculty Council. “The building is a hard physical representation of what happened.” She said that’s a common feeling among most teachers.