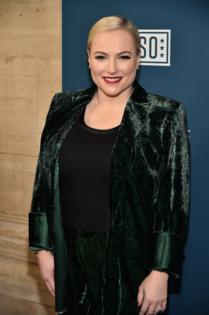 Speaking to People magazine, McCain set realistic expectations for how her political life may go.

“I feel like I’ve done it all,” McCain said. “What else can I do? I don’t want to be Tucker Carlson.”

“At some point, maybe,” McCain, 37, said about a run for office. “My tone keeps shifting because, quite frankly, the bench in Arizona is not great, but it’s very Trump-y. The woman running for governor right now, Kari Lake, was endorsed by President Trump and is more than likely going to win. But it’s still an interesting state filled with really interesting people. (Sen.) Kyrsten Sinema, obviously, is a total independent in so many different ways.”

Despite the negative ramifications of a political career, McCain claims that a campaign sounds more enticing than a typical cable news job

“I’m not running for office ... but I’m just saying if there was a metric of placing bets: Yes. If someone has a gun to your head (and says) ‘Pick one or the other ...’”

“People hate children of politicians. People hate it,” Meghan said. “So I would probably lose.”

That being said, McCain does still have an affinity for the political world.

“I really miss politics, and not that running for office — I have a friend who does political consulting for pretty high-level politicians, and I was thinking like maybe doing something like that in the future,” she said. “I feel very at home among political people. I feel very understood. We’re all interested in the same things. And I feel really respected in a way that I don’t necessarily feel in TV media, for whatever that’s worth.”