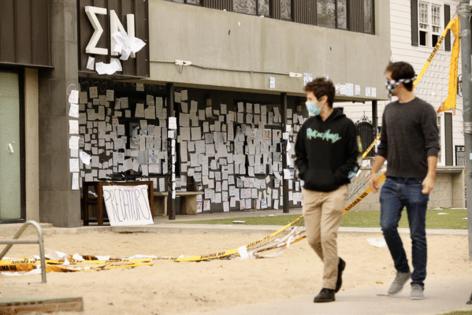 LOS ANGELES — Faced with growing furor over reports of sexual assault and druggings at a University of Southern California fraternity chapter, President Carol Folt said late Friday that the university has suspended an individual in connection with some of the allegations and apologized for the pain roiling campus.

“Such behaviors are deeply disturbing, they hurt people and go against everything we stand for as a community,” Folt said in a message to the campus community. “We are sorry for the pain and anguish this is causing.”

Outrage over allegations involving the Sigma Nu chapter escalated Friday, as protesters demanded that USC take stronger action to address the reports. USC said Thursday that it placed Sigma Nu on interim suspension, blocking it from hosting or organizing any activities, a day after six students filed reports to the USC Department of Public Safety that they had been drugged at the fraternity house on Sept. 27. One student reported being drugged then sexually assaulted.

Also Friday, the Los Angeles Police Department identified Sigma Nu President Ryan Schiffilea as a suspect in a sexual assault case, said Detective Meghan Aguilar, an LAPD spokesperson. Schiffilea has not been arrested or charged and was questioned by detectives earlier this week after a woman reported that she was sexually assaulted on Oct. 16, Aguilar said.

It is unclear whether Schiffilea is the student who Folt said was placed on interim suspension, as her letter did not identify that person. Neither Schiffilea nor several of his family members could be reached for comment.

Schiffilea’s name was written in marker on the Sigma Nu fraternity house, where students gathered Friday to plaster the outside wall with protest signs and angry notes. Many questioned fraternity culture and USC’s actions to address the pervasive problem of campus sexual assault.

USC reported the allegations and chapter suspension to Sigma Nu’s national headquarters. The national and USC chapter suspended the individual accused of sexual assault pending a complete investigation, according to an internal memo sent to parents of current fraternity members and alumni. The memo did not identify the suspended student.

Shiwali Patel, who directs the Justice for Student Survivors initiative of the National Women’s Law Center, said campus sexual assault survivors and their allies are speaking out in growing numbers because the crime appears as pervasive as ever and the climate to fight it is getting worse. Those who report sexual misconduct are facing growing retaliation for doing so and campuses are more hamstrung by Trump administration rules making it harder to prove the allegations, she said.

“We’ve seen more protests,” Patel said. “Students are fed up and taking matters into their own hands in demanding schools respond better.”