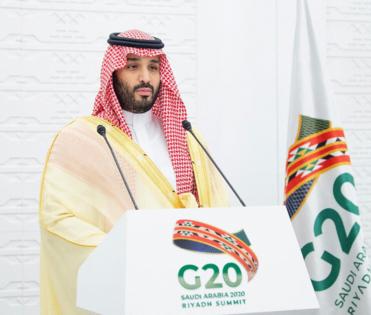 Saudi Arabia has pledged to eliminate planet-warming emissions within its borders by 2060.

It marks a seismic shift for the world’s biggest oil exporter, though officials included plenty of caveats and emphasized that Saudi Arabia and others would need to pump crude for decades to come.

Crown Prince Mohammed bin Salman, the de facto ruler, made the announcement in Riyadh on Saturday at the opening of a climate conference. His government has consistently argued against cutting investments in fossil fuels and blamed climate activists for this year’s surge in energy prices.

While Saudi Arabia’s new goal aligns with China and Russia, its time frame lags other large economies like the U.S., U.K., and European Union, which all aim to be net zero by 2050.

The U.S. and European nations have put pressure on Saudi Arabia to accelerate efforts to curbs emissions and invest more in renewable energy. The crown prince’s decision provides a boost to them ahead of the crucial COP26 climate forum starting this month in Glasgow.

“I hope this landmark announcement will galvanize ambition from others ahead of COP26,” the U.K.’s president for the talks, Alok Sharma, said on Twitter. “Look forward to the detail.”

Mohammed bin Salman underscored the difficulty of cutting emissions in a desert country so dependent on oil and which burns huge amounts of fossil fuels for air conditioning and desalinating seawater.

Saudi Arabia will reach the the target in a way that “protects the leading role of the kingdom in strengthening the security and stability of global energy markets, in light of the maturity and availability of the necessary technologies to manage and reduce emissions,” he said in a recorded speech at the Saudi Green Initiative forum.

The government will rely heavily on carbon capture, Energy Minister Abdulaziz bin Salman said. It aims to reduce carbon emissions by 278 million tons per year by 2030, more than double its former target, he said.

FORT LAUDERDALE, Fla. — When students returned to school this year, they brought with them pent up energy from a tough time in near isolation during the pandemic.

MIAMI — Some students at the University of Miami want the school to stop sending them on research field trips to the Miami Seaquarium after a damning federal report revealed that park managers fed spoiled food to marine ...Read More

Booster shots are rolling out across much of the world to spur protection against COVID-19, prompting questions about when exactly they should be given. While there aren’t clear-cut answers, doctors say there’s a ...Read More