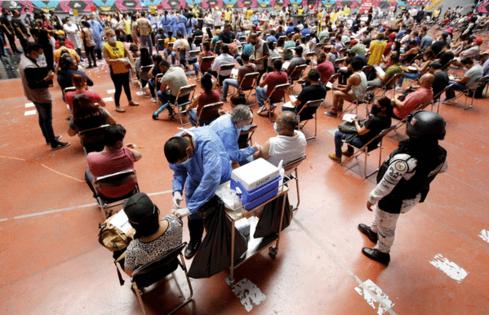 SAN DIEGO — Coronavirus vaccines have a six-month shelf life after which medical providers must throw them in the trash.

Nobody trained to administer vaccines can bear to throw them out, and medical providers across San Diego County thought they had hit on the perfect solution: Send some of those about-to-expire doses to Tijuana or other parts of Baja California where they could find a warm arm before expiring in a cold freezer.

But that idea, Dr. Eric McDonald, the county health department’s chief medical officer, said in a statement Wednesday evening, was shot down by the federal government, which has the ultimate say on any such initiative.

“I contacted the White House Vaccine Task Force and was told it was not possible,” McDonald’s statement said.

Asked for an explanation Wednesday, neither the White House nor the federal Health and Human Services Agency had responded to explain the situation as of Friday afternoon. The Washington Post, in a piece about the issue published Friday morning, quoted “White House officials” as saying the vaccines “are property of the federal government, not the cities or states in which they are distributed” meaning that “the federal government is liable for their use, and the donation efforts must be run out of Washington.”

Brett McClain, chief operating officer for Sharp HealthCare, the region’s largest health system, said that it was not so much that there are massive supplies of vaccine sitting around and about to expire as there is a collective desire to have a comprehensive plan in place when expiration dates draw near.

“It was more of a conversation around ‘what’s our ongoing process going to be for this?’” McClain said, adding that rumors that Sharp destroyed a large amount of Johnson & Johnson vaccines destined for Mexico are not true.

The Washington Post piece references 10,000 doses that were collected from throughout Southern California and blocked from being sent to Mexicali, though the exact sources are not specified.

According to the California Department of Public Health, the vaccine supply has so far been roughly equal to demand, and San Diego County providers are wasting less than many places in the state and nation.