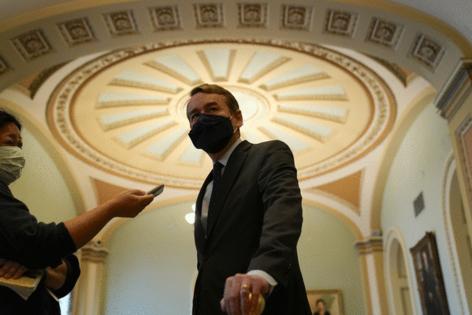 WASHINGTON — Democrats are facing the possibility of a much shorter extension of an expanded child tax credit they’ve touted than many had hoped, which could ultimately stave off cuts to other aspects of the benefit they are fiercely defending.

As negotiators work to trim the House’s budget reconciliation bill from a $3.5 trillion plus package to somewhere closer to $2 trillion, the $556 billion expansion of a tax break meant to help cover the costs of raising children and reduce child poverty is likely to end up less ambitious than lawmakers planned.

Sen. Joe Manchin III, D-W.Va., has pressed to add work requirements and means test the benefit to target it only to those most in need. But staunch support for getting the benefit to the poorest Americans and discomfort with taking it away from higher earners because of President Joe Biden’s pledge not to raise taxes on anyone making over $400,000 may make a one-year expansion the compromise Democrats can get behind.

“We are going to have to make some difficult choices as the bill gets smaller,” Sen. Michael Bennet, D-Colo., said in a recent interview, of possible cuts to child care programs in the bill. “I hope in that context we prioritize our children.”

Democrats expanded the child tax credit in their March coronavirus relief law and most are now looking to preserve the broader accessibility and bigger, monthly checks they legislated for 2021. Bennet, a lead proponent in the Senate of expanding the child tax credit, described that expansion as “one of the best things the Biden administration has done.”

Democrats have pointed to studies showing the expansion cut child poverty rates. The monthly installments aim to help people living month to month find stability and afford necessities such as food, bills and school supplies. Most Democrats are unwilling to entertain Manchin’s suggestion of work mandates, arguing that would cut out single parents or grandparents and undercut the benefit’s impact on poverty.

It was Biden himself who first floated the option of a one-year extension of the credit to Democrats, lawmakers have said, with some suggesting it’s a move to get a deal on the reconciliation package done after weeks of negotiations and to preserve broader accessibility and value of the credit.

Nevada Rep. Steven Horsford said this week that “99.9% of Democrats” understand the importance of expanding the child tax credit in full to help middle-class families.

Biden is “trying to do the best that he can. I get that,” Horsford said. “But we need to again recenter the people who are affected by the policy. And in my district that’s working families — a lot of them single moms with children who have received a lot of benefit from this tax cut already.”

There appeared to be some openness in recent weeks among senators to lowering the income threshold for eligibility to the credit to get a deal with Manchin and protect the rest of the expansion. But Biden’s $400,000 pledge is complicating that option, which would roll back a Republican-drafted policy.