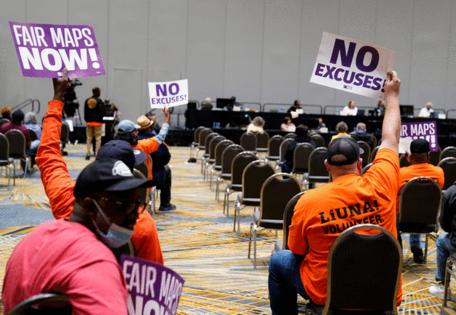 DETROIT — Redistricting experts urged the panel redrawing Michigan's voting boundaries to provide additional data and rationale to support the maps they've proposed so far, arguing the information will be essential if and when the maps are challenged in court.

The comments come as Michigan's Independent Citizens Redistricting Commission moves through a series of five public hearings to get feedback on proposed draft maps they're scheduled to push through to a sort of semifinal round on Nov. 5.

Whatever maps get approved Nov. 5 will enter a 45-day public comment period starting Nov. 14 and a final vote will be taken on one state House, state Senate and congressional district map Dec. 30. Candidates in the 2022 primary and general elections will run in the newly drawn districts.

"Not everyone has to agree with where the commission lands, but we all need to — in order to accept the maps — understand what went into drawing them," said Nancy Wang, executive director for Voters Not Politicians, the ballot committee that spearheaded the 2018 constitutional amendment that created the commission.

The commission pushed back on the critiques Friday, arguing the redistricting process so far has been "open and transparent."

"All of the data considered is listed in the draft proposed maps, which is accessible off of the home page on the website," said Edward Woods, a spokesman for the commission. "If there is additional data that needs to be considered, we welcome anyone to provide it at a public hearing or through the public comment portal."

Prior to the formation of Michigan's Independent Citizens Redistricting Commission in 2018, Michigan's voting district maps were redrawn by the majority party every 10 years — a process that critics said resulted in gerrymandered maps that benefited one party over the other.

The commission has been working for weeks to draw 22 proposed draft maps that contain districts of equal population, balanced racial representation, communities of interest and partisan fairness. But the preliminary plans have received a variety of criticisms during public hearings over the past few days.

Wang acknowledged that the current public hearing phase is the "messiest" part of the redistricting process, based on the experience of other states.

"This is when the public actually has lines to see and comment on," she said. But Wang noted the debate occurring was an important departure from past processes.