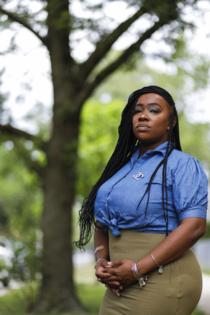 CHICAGO — Against Chicago police Superintendent David Brown’s wishes, the city will seek to fire a patrol sergeant accused of ordering the arrest of a CTA supervisor in retaliation for her complaint against one of his officers, according to a decision released late Thursday.

The Civilian Office of Police Accountability recommended Sgt. William Spyker be fired for the Feb. 2020 incident earlier this summer. Brown, however, believed the punishment was too harsh and suggested a six-month suspension, leaving a member of the Chicago Police Board to decide which side had suggested the more appropriate discipline.

In a three-page decision, Police Board member Steve Flores said Brown had not meet the burden of proof to overturn COPA’s recommendation. The Police Department, following city policy, did not conduct its own investigation into the incident.

The move comes more than a year after the Tribune published body-camera recordings showing Spyker giving CTA supervisor Martesa Lee the option of dropping a complaint against a police officer or face arrest. When she refused to rescind her complaint, Spyker ordered her arrest in front of her co-workers and a platform of riders.

“Is it worth it to you?” the sergeant asks on the video shortly before Lee was placed in handcuffs.

Amid high-profile deaths at the hands of police officers around the country, the incident exemplified the kind of small, typically undocumented interaction that can erode a community’s trust in the Chicago Police Department, critics have said. The encounter highlighted, yet again, a decades-old “code of silence” — an unwritten understanding that officers protect one another at all cost — that has led to federal oversight of the department in recent years, they said.

The interaction in the video also seemingly went to the core of COPA’s mission, which encourages citizens to report acts of alleged misconduct and let an independent agency investigate them.

Spyker, a 24-year veteran who has never faced serious discipline, could not be reached for comment. He has denied any wrongdoing in court records related to a civil rights lawsuit filed by Lee in 2020.

The city settled the case for $57,000 just days after the COPA’s termination recommendation was sent to the Police Department but before it was made public.

Lee, who continues to work for the CTA, offered a muted response to the decision. Since her story became public, she has received racist and hateful messages from people angry at her for challenging Chicago police, her lawyer said.