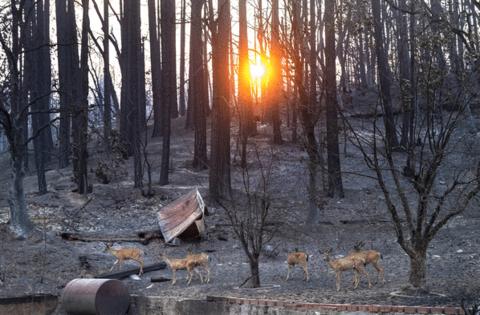 SACRAMENTO, Calif. — In the burned-out town of Greenville, deep on a Plumas County mountainside, the storms now battering Northern California are another trauma in a year of heartbreak.

“Be careful what you wish for,” Plumas County Supervisor Kevin Goss said Thursday, just off a briefing with state emergency response officials. Torrential rainfall is expected to soften the state’s drought this weekend, but the rain also brings the risk of debris flows and floods in places hit by wildfires.

“We are going to have some problems,” Goss said. “It was inevitable for this to happen this way. But we will deal with it. We are strong and resilient.”

A large trough of low pressure hovering off the coast of the Pacific Northwest is driving repeated rounds of precipitation in the northern part of California. It ushered in the first major storm of the season Thursday, National Weather Service forecasters said, along with fears that places already hit by the disaster of flames may now be primed for the destruction of downpours.

The storms come after officials announced California’s driest year in a century, but the whipsaw conditions are not totally surprising. Scientists have long warned that climate change could hit the West with quick shifts from dry to wet, and visa versa.

The National Weather Service in Reno has issued a flash-flood watch for a portion of northeast California through Friday morning around the Dixie, Sheep, Walker and Beckwourth burn scars. Another storm expected to move in hours after that is lifted — the worst rains are expected on Sunday, when places like Plumas may see up to 10 inches in a 24-hour period.

What’s known as an “atmospheric river” is pumping continuous moisture over the region, said Ryan Kittell, a meteorologist with the weather service’s Oxnard station, and could lead to a “bomb cyclone,” a heavy, moisture-laden weather pattern characterized by a quick, significant drop in barometric pressure. Also called bombogenesis, it’s a weather event familiar in nor’easter storms on the East Coast and prone to happen this time of year.

The storm is expected to be a Category 5 — the highest level on a scale based on strength and duration, said Marty Ralph, director of the Center for Western Weather and Water Extremes at Scripps Institution of Oceanography, a department of UC San Diego. Ralph is the leader of the team that developed the rating system.

Goss said that beyond concerns to life and property, officials are also worried about contamination of the state’s drinking water from toxic runoff. With fires only recently contained in many areas, there hasn’t been enough time to clear burned homes and businesses, where the ash can be filled with pollutants. Runoff from those sites could reach the Feather River, which flows through the Dixie burn scar, and feeds the Oroville Dam east of Sacramento, where more than a trillion gallons of water can be stored.

Similar concerns have been raised for the waterways that feed Lake Tahoe.