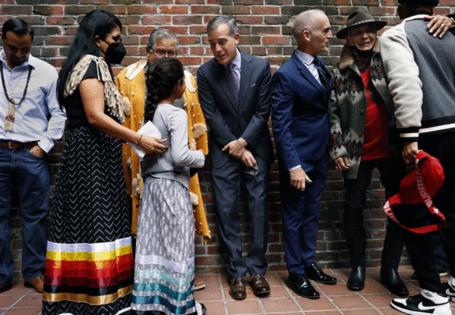 Many American Indians and Alaska Natives say the dramatic increase in their numbers recorded in last year’s census supports their long-standing argument that Indigenous history should get more attention in public school classrooms.

Even before the latest tally, there was a growing movement to infuse more Indigenous material into school curriculums — not only to connect students to their roots, but also to ensure that all students know about the contributions of Indigenous peoples and to encourage respect for the sovereign rights of tribes.

Tribes also hope that the addition of millions of people counted as American Indian or Alaska Native in last year’s census will translate into a larger share of public money, such as the $4.8 billion the federal government allocated last year for tribal coronavirus pandemic relief. The federal government based that amount on earlier, lower estimates of the country’s Indigenous population.

Some states, including Oklahoma, Oregon, Washington and Wisconsin, already have taken steps to make Indigenous history and culture a larger part of classroom learning. Now politicians and advocates in other states are doing the same: Connecticut and North Dakota enacted laws this year requiring Indigenous history lessons, while California has pending legislation on the issue.

The census count of American Indians and Alaska Natives grew by almost 4.5 million to 9.7 million between 2010 and 2020, an increase the U.S. Census Bureau credits to better questions in 2020 that helped tease out the heritage of multiracial people.

The higher numbers will help boost Indigenous political clout, said Sarah White, lead facilitator for the South Dakota Education Equity Coalition, which is working with local Sioux tribes to boost Indigenous content in school curriculums. She suggested that even the higher numbers in the 2020 census reflect an undercount of American Indians and Alaska Natives, given the challenges of counting during the pandemic.

“Whatever our population, morally and ethically speaking, we are the original inhabitants of this land that is now considered South Dakota, and that should be enough for our inclusion,” White said.

However, the push to increase schools’ emphasis on Indigenous history and culture has run into political headwinds in South Dakota. Members of a working group charged with crafting new social studies standards say the administration of Republican Gov. Kristi Noem deleted many references to Native Americans, including historical lore and lessons on the meaning of symbols such as star quilts, buffalo and medicine wheels.

Montana often is cited as a pioneer in ensuring that public school students learn about Indigenous history and culture. In 1972, it enshrined that principle in its state constitution, which now declares that Montana “recognizes the distinct and unique cultural heritage of the American Indians and is committed in its educational goals to the preservation of their cultural integrity.”

In July, though, the ACLU of Montana and the Native American Rights Fund filed a lawsuit claiming the state has not met its legal obligations and that “Indian and non-Indian Montanans are not learning about American Indian heritage in a culturally responsive manner.”