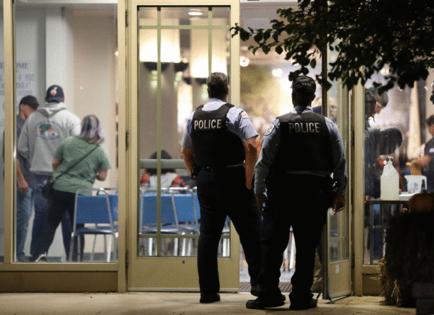 A group of dozens of Chicago firefighters and water department workers are asking a federal judge for a temporary restraining order against Mayor Lori Lightfoot’s vaccine mandate, the latest salvo in a battle over city rules.

The long-shot request for an injunction, filed Thursday in federal court by attorney Jonathan Lubin, would prevent the city from requiring workers to disclose their vaccination status or be disciplined for not being vaccinated.

The plaintiffs stand to lose their jobs over their “deeply held beliefs that they should not take the COVID-19 vaccine,” the lawsuit says.

The Fraternal Order of Police Lodge 7 has filed suit in Cook County against the rule, and the union’s opposition has prompted some Indiana officials to step in to try to lure disgruntled officers across the border.

Indiana U.S. Sen. Mike Braun, a Republican, spoke on Fox News this week with a pitch to Chicago police officers turned off by Lightfoot’s order to report their vaccination status: Come to the Hoosier State instead. In a Thursday statement to the Tribune, he added that “several experienced Chicago cops” have already reached out to his office.

“Our police do one of the hardest jobs in the world and they deserve respect — not heavy-handed mandates that will force them out of a job if they won’t disclose their private medical information,” Braun wrote.

Braun’s invitation was swiftly derided by Indiana Democrats who said he was once again inflaming a crisis to score political points. Jim Wieser, chair of the Lake County Democratic Party, said that the last thing his state needs is more unvaccinated workers.

“For him to invite, especially, first responders over so they don’t have to get vaccinated, it’s so absurd it almost defies logic,” Wieser said in a phone call, adding Braun “says stuff to just be inciting folks.”

OXFORD, Mich. — A football player, a volleyball striker, a captain of the bowling team and an aspiring artist.

WASHINGTON — Democrats made their case Wednesday for including temporary immigration protections in their social spending bill — setting the stage for a potential showdown on the party’s last-ditch effort to provide ...Read More

SACRAMENTO, Calif. — A community activist is suing Sacramento police over its officers' response to racial justice protests last year, alleging that its officers roughed up Black Lives Matter supporters and others while ...Read More

COLUMBUS, Ohio — More Ohioans were hospitalized for COVID-19 this week than at any time since last winter's surge in cases, a development that could worsen still with more cold weather and holidays approaching.