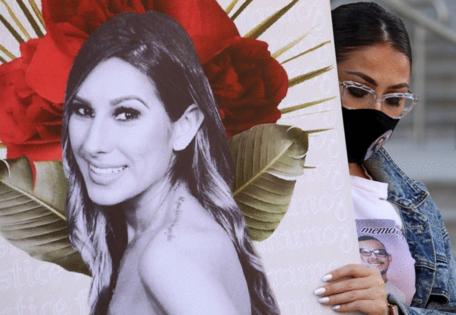 LOS ANGELES — The son of an L.A. millionaire was sentenced to seven to nine months in a juvenile camp after slamming his father’s Lamborghini into another woman’s car earlier this year, ending a case that sparked protests and outcries from the victim’s family, who alleged the defendant was given soft treatment by authorities because of his age.

The driver — whose full name is being withheld because he was 17 at the time of the crash — was “racing” in the high-end car with his then-girlfriend at speeds of more than 100 mph when he collided with a car driven by Monique Munoz, 32, near Olympic Blvd. and Overland Ave. on Feb. 17, prosecutors said. The force of the crash nearly split Munoz’s car in half and she died at the scene.

The driver pleaded guilty to one count of vehicular manslaughter in April. His pending sentencing hearing had drawn demonstrations outside the Inglewood Juvenile courthouse in recent days from Munoz’s friends and family. Munoz’s loved ones said the teen should at least spend some time in a county juvenile camp and argued that his request for probation would be an injustice.

“House arrest in a mansion is not punishment,” Cynthia Crespin, Munoz’s cousin, said in court last week. “He took an innocent life in a careless and senseless way.”

The driver’s father is James Khuri, a multimillionaire who owns several real estate companies and an e-commerce business. The Los Angeles Times normally does not identify juveniles accused of crimes and has not published the teen’s name in this case, but Khuri spoke out publicly about the case earlier this year, apologizing to the Munoz family in the face of protests and media scrutiny.

While the driver has no criminal record, prosecutors had argued that he should spend time in a juvenile camp because the fatal wreck was not the first time he’d driven recklessly. The teen had been cited twice for driving at excessive speeds in Beverly Hills, resulting in his driver’s license being suspended, investigators said in court. Last week, Los Angeles police officials also testified that the teen had posted on social media about engaging in “drifting” and other street racing activity in the weeks before the wreck.

Mark Werksman, the teen’s defense attorney, had asked Los Angeles County Superior Court Judge Sabina Helton to sentence the teen to probation, noting that he was diagnosed with autism, depression and attention deficit disorder after the crash. Psychologist Karen Schiltz testified last week that the teen had likely suffered from autism his entire life but was not properly diagnosed until this year.

Schiltz warned that the teen would likely be “victimized” if held in an L.A. County juvenile camp. Werksman said he was especially concerned about the harm that could befall the teen in a local juvenile facility after the California Board of State and Community Corrections ruled last month that the county’s juvenile facilities were unsuitable to house youthful offenders.