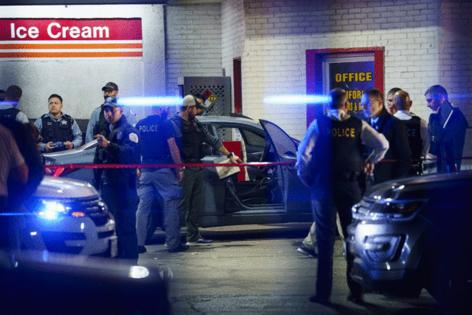 CHICAGO — Charges are expected later Thursday against a man and a woman who were involved in a chase that resulted in a Chicago police officer accidentally shooting two of his fellow officers late Wednesday at a gas station in west suburban Lyons, police said.

The shooting happened as officers struggled with one of the suspects, who was wanted in an investigation of a homicide, Chicago police Superintendent David Brown.

Shortly after midnight Thursday, two male officers were released from MacNeal Hospital in Berwyn to be transferred to another hospital and cheers broke out among other Chicago officers who gathered outside the emergency room.

The situation began about 9:15 p.m. in the 1200 block of South DuSable Lake Shore Drive Chicago police spotted a car wanted in connection with the homicide, Brown said during a media briefing outside MacNeal.

Officers and a police helicopter followed the car, and when it stopped at a Citgo in Lyons, 8050 W. Ogden Ave., officers surrounded a person inside.

The bullet went through the arm of one and into the shoulder of another, Brown said.

Two suspects inside the car were arrested and a gun was recovered from their car, Brown added.