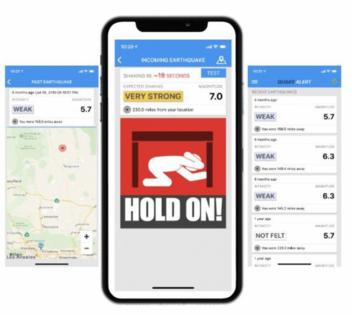 A major earthquake in California is likely to knock out many communications services for days or weeks, including the vast majority of cellphones in the areas closest to the epicenter, according to a landmark new analysis by the U.S. Geological Survey.

The widespread disruption would imperil the public's access to 911 operators and lead to delays in reporting fires and calls for medical help.

Cell towers are vulnerable to sustained power outages. The same goes for cellular equipment on power poles and buildings at risk of extreme shaking, liquefaction and fire, the USGS said. California's cellphone networks have been notoriously unreliable during blackouts that occur during life-threatening emergencies, such as during wildfires in 2019, where wide swaths of the San Francisco Bay Area were cut off from cell service for significant periods.

In a grim estimate of the challenges, a magnitude 7 earthquake that struck on the Bay Area's Hayward fault could leave Alameda County — its likely hardest hit area — able to provide only 7% of the demand for voice and data service after the quake. That is identical to the communications service failure in New York City after the 9/11 attacks in 2001, when 93% of cellphone calls failed.

The findings in the USGS study are one of many vulnerabilities uncovered by the government agency, which will formally present its findings at a news conference at 10:30 a.m. Thursday. Prior to the conference, California will participate in the annual ShakeOut drill, in which people are asked to drop, cover and hold on as they should during a real earthquake.

The report comprises about 780 pages, adding to nearly 600 pages of findings released since 2018 on the so-called HayWired scenario. The report is the third volume in a series of reports researched over six years focused on a future earthquake on the Hayward fault; the final volume was written by 20 main authors and 80 contributors.

The Hayward fault has been called a "tectonic time bomb," and a major quake on it represents a nightmare scenario because it runs through densely populated areas with old buildings, including directly beneath the East Bay cities of Oakland, Berkeley, Hayward and Fremont.

The Hayward fault is one of California's fastest moving, and on average, it produces a major earthquake about once every 150 to 160 years, give or take seven or eight decades.

It has been 153 years since the last major quake — a magnitude 6.8 — on the Hayward fault. The USGS estimates a magnitude 7 quake today on that fault could result in at least 800 deaths; hundreds more could die from fire following the quake, which would make this scenario California's deadliest since the great 1906 earthquake destroyed much of San Francisco.

In this hypothetical seismic scenario, electricity services could be out for weeks, while gas and water service could be interrupted for months. The USGS estimates an East Bay resident could be without water from six weeks to six months, and water supply outages could hobble firefighting efforts.

CHICAGO — After a lengthy and at times tense day of testimony Tuesday, jurors in the Jussie Smollett trial are slated to hear from more prosecution witnesses Wednesday at the actor’s trial for allegedly orchestrating ...Read More

BALTIMORE — Even in a city hardened to senseless violence, the killing of Jacquelyn Smith was shocking.

The 54-year-old engineer at Aberdeen Proving Ground was stabbed in her chest while driving with her husband and ...Read More

The Santa Fe County Sheriff's Office released new documents Tuesday that shed more light on how live ammunition may have gotten on the set of the Alec Baldwin western "Rust" and then loaded into a Colt .45 single-action ...Read More

Donna Smith was vaccinated, booster shot and all, and ready to travel.

Then came reports a new fast-spreading COVID-19 variant, Omicron, raising the specter of a new wave of infections, hospitalizations and deaths.