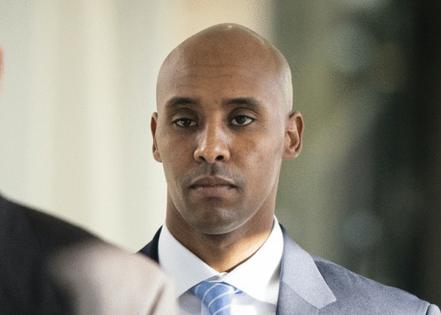 MINNEAPOLIS — A judge scheduled to resentence former Minneapolis police officer Mohamed Noor on Thursday morning for fatally shooting Justine Ruszczyk Damond will be asked to pick between to disparate requests — 10 years in prison or release from incarceration.

Noor, who turned 36 Wednesday, is being resentenced at 9 a.m. on a lower count — second-degree manslaughter — after the Minnesota Supreme Court ruled in September to overturn his third-degree murder conviction. The decision vacated a prison term of 12 1/2 years Noor was already serving on the murder count.

Second-degree manslaughter is punishable by up to 10 years in prison, but state sentencing guidelines recommend a term between about 3 1/3 and 4 3/4 years in prison for defendants with no criminal history, such as Noor. The presumptive term is four years, according to the guidelines.

The Hennepin County Attorney's Office has said it will request the maximum prison term.

Noor's attorneys, Thomas Plunkett and Peter Wold, filed a memorandum last week asking Hennepin County District Judge Kathryn Quaintance to sentence him to a term of about 3 1/3 years. They requested the lower end of the sentencing guidelines range, citing "unexpected and particularly harsh conditions of [Noor's] incarceration as well as his post-sentencing conduct."

Plunkett and Wold also asked the judge to give Noor credit for time he's already served in prison and to place him on supervised release, which typically requires regular check-ins with the Minnesota Department of Corrections (DOC), regular drug and alcohol testing, and restrictions on certain activities. It can also include electronic home monitoring. Violations of such terms can result in a defendant being sent back to prison.

Defendants in Minnesota must serve 2/3 of their prison term before becoming eligible for supervised release.

Mitchell Hamline School of Law professor emeritus Joe Daly said if Quaintance granted the defense's request, Noor would not be allowed to walk out of the courtroom. Noor would be transported back to prison to fill out paperwork and could be released from prison later the same day, said Daly, who predicted that the judge would would sentence Noor to four or more years in prison instead of releasing him.

Jurors convicted Noor in April 2019 of third-degree murder and second-degree manslaughter for shooting Damond in 2017 while responding to her 911 call about a possible sexual assault in the alley behind her south Minneapolis home.

He entered prison on May 2, 2019 and was first sentenced in June 2019. He originally served his time in administrative segregation at Oak Park Heights prison in Minnesota, but was transferred on July 11, 2019 to facility in North Dakota for his own safety.