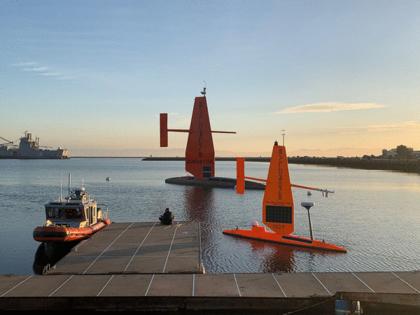 But for the first time, messages from that frothy space were transmitted to scientists from the eyewall of a Category 4 cyclone by a specially equipped vessel floated into the path of Hurricane Sam as it tore through the Atlantic basin last month.

Created by the California-based company Saildrone, the solar-powered, unmanned vehicle looks similar to a canoe but is self-righting with a lead-weighted keel and a unique wing that helps with stabilization.

While the data collected by the drone in Sam’s eyewall was experimental and not used in forecasts by the National Hurricane Center, researchers see a potential to improve weather models with measurements including near-surface temperature, humidity levels, wave heights, wind speeds and ocean salinity.

The project is a partnership between the National Oceanic and Atmospheric Administration and Saildrone.

“Hurricanes are fueled by the ocean through heat flux and we want to better understand the physical process happening in the air and sea interface,” said Jun Zhang, a meteorologist with NOAA’s Hurricane Research Division who worked on the experiment and flew missions into Hurricane Sam. “This process is one of the keys for hurricane intensification.”

This hurricane season, six storms underwent a rapid intensification, including Sam, which accelerated from an 85-mph Category 1 storm at 5 p.m. Sept. 24 to a 140 mph Cat 4 by 5 p.m. the next day.

While hurricane track predictions have showed consistent improvement, intensity predictions stagnated through the '70s, '80s, '90s and early 2000s. Some small improvements in intensity forecasting have been measured since 2013, according to a 2020 study in the journal of the American Meteorological Society.

Brian Connon, vice president of ocean mapping for Saildrone, said sending the 23-foot long vehicles into a hurricane wasn’t something being considered by the company in 2014 when it was founded.