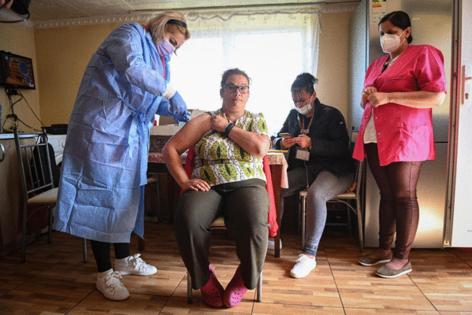 RIGA, Latvia — The coronavirus is resurgent in the European Union’s less-vaccinated east — bringing with it the return of lockdowns.

Latvia on Wednesday became the bloc’s first member state to once again shut down chunks of its economy as soaring infections — the world’s highest per capita during the past week — threaten to overwhelm hospitals.

For the next month, the Baltic country of 1.9 million people will close bars and shops, impose curfews and resume distance learning for students. Others may not be far behind.

Neighboring Estonia says it may follow if the situation there gets much worse. Romania, meanwhile — where less than a third of its 19 million population is vaccinated — has turned to the World Health Organization for help after deaths and new cases hit records.

While EU officials have lauded the bloc’s vaccination campaign, the moves underscore a divide between east and west, where much higher take-up is translating into fewer cases that result in hospitalization or death. Untrusted for years in many cases, governments in the EU’s ex-communist wing are failing to convince citizens of the benefits of inoculation — despite continuing jumps in daily deaths heading into the winter.

“For four weeks, we’ll all go into a stricter regime,” Prime Minister Krisjanis Karins said after his government confirmed the new lockdown. “But on Nov. 15, we’ll return to today’s situation, which is already relatively limited for the unvaccinated.”

Karins was responding to warnings from the health sector that a critical level of 1,500 hospitalized COVID-19 patients may be reached as early as this week. Despite some restrictions already being implemented earlier this month, confidence in the government isn’t high. A recent cover of Latvia’s Ir magazine featured a mock-up of Karins standing next to the Grim Reaper.

The situation is perhaps most acute in Romania, where officials have of late likened conditions to the scenes in Italy when the virus first arrived last year. What’s more, the Black Sea nation is mired in political crisis that complicates efforts to find and implement solutions.

Things aren’t much better across the border in Bulgaria — the EU’s least-vaccinated state with just a fifth of the population jabbed. The government there is limiting who can visit restaurants, shops and galleries. Some schools will also close.

In Poland, authorities are monitoring rising a rising caseload and may decide by the end of the week on “drastic” steps, should the situation continue to worsen.

Russian President Vladimir Putin has ordered the most sweeping restrictions since May as new infections and deaths reached record levels.

DETROIT — Interim President Mary Sue Coleman told the University of Michigan community Sunday evening that while she was "deeply saddened by the circumstances of the invitation," she agreed to temporarily replace fired ...Read More

CHARLOTTE, N.C. — While the Carolinas slowly sunk Sunday under snow and ice, Charlotte Douglas International Airport was a sea of red — red as in hundreds of canceled flights stretching into Monday.