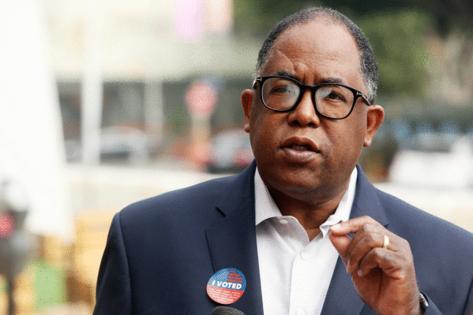 LOS ANGELES — The Los Angeles City Council doesn’t have the power to fire any of the 15 members who represent L.A.'s 4 million residents.

But the government body can bar members from doing their job. And for the second time in less than two years, the City Council on Wednesday suspended one of its own.

The council voted 11-3 to immediately suspend Councilman Mark Ridley-Thomas, a veteran South Los Angeles politician who has been indicted on federal bribery, conspiracy and other charges. Hours later, city officials announced he would no longer receive his $223,800 salary.

It was another dispiriting day at City Hall, which has been rocked by a series of alleged corruption scandals. In June 2020, the council suspended then-Councilman Jose Huizar after he was charged with a racketeering count in an alleged pay-to-play scheme.

Both Ridley-Thomas and Huizar are fighting the charges against them.

The emotional tenor of Wednesday’s City Council deliberations was markedly different from the unanimous vote to suspend Huizar.

Some council members urged their colleagues against suspension, arguing the council shouldn’t play the part of a jury and that the councilman hadn’t publicly detailed his defense.

Councilman Bob Blumenfield told his colleagues that he was “up all night, tossing and turning” about the vote, which he called “terrible.”

“I have to vote yes on the suspension,” said Blumenfield, who represents the western San Fernando Valley. “But I don’t want to. And I really don’t want to even have this come up.”

Federal prosecutors allege that Ridley-Thomas, while serving on the Los Angeles County Board of Supervisors, conspired with Marilyn Louise Flynn, former dean of the University of Southern California’s School of Social Work, to steer county money to the university. In return, Ridley-Thomas’ son Sebastian was admitted to USC’s graduate school and given a full-tuition scholarship and a paid professorship, prosecutors allege.