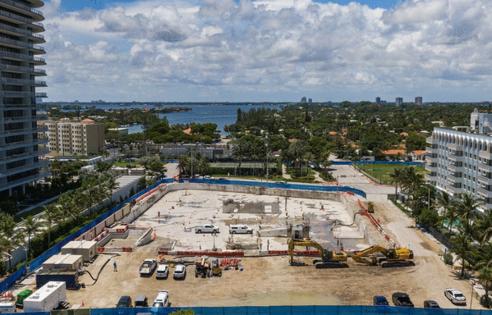 MIAMI — In the rubble of one of the deadliest building failures in modern history, Hussain Sajwani sees opportunity — a prime beachfront property that could become home to the billionaire Middle East developer’s first project on American soil.

Sajwani, a friend and business partner of Donald Trump known for flashy towers in his native Dubai, has visions of erecting an ultra-luxury condo building in Surfside where Champlain Towers South once stood, a spokesman for his company, DAMAC Properties, confirmed Tuesday. His $120 million bid for the land, one of several competing offers expected to come in, was certified by a judge last month ahead of a court auction early next year.

“We have always considered Miami as a natural fit, given its reputation for being a popular, luxurious destination,” the spokesman, Niall McLoughlin, said in an email.

Sajwani’s resume sparkles with successful projects — dozens of residential developments across the Middle East, partnerships with the fashion houses Versace and Fendi, and two Trump-branded golf courses in Dubai, one of them designed by Tiger Woods. He has a reputation for bold marketing ploys, like offering free Lamborghinis to potential buyers. And he has also grown close to Trump, attending the former president’s inauguration, pitching him on a $2 billion development deal, and becoming a member at his private Mar-a-Lago club in Palm Beach.

At a New Year’s Eve gala at the club in 2016, Trump called Sajwani and his family “the most beautiful people.”

McLoughlin declined to say whether any members of the Trump family could be involved in the project. Jared Kushner and Ivanka Trump own a condo in a tower two blocks north of the Champlain site. The Trump Organization did not respond to a request for comment. Neither did the Kushner Companies.

The money used to buy the land will compensate survivors and unit owners.

Still, talk of a new tower springing up on the Surfside disaster site is painful for some. Relatives of some of the 98 people killed in the June 24 collapse say they can’t stand the thought of building glitzy condos instead of a memorial honoring those who died.

“It will be a stain on the history of Surfside and the entire country to build a condo on top of such a tragedy, on top of a graveyard,” said David Rodan, who lost his brother and three cousins in the collapse.

But Miami-Dade Circuit Judge Michael Hanzman, who will get the final say, seems set on squeezing maximum value out of the land to benefit victims and their families. Sajwani’s bid set the baseline price for a court auction expected to be take place in February as part of a class-action lawsuit being heard before Hanzman.