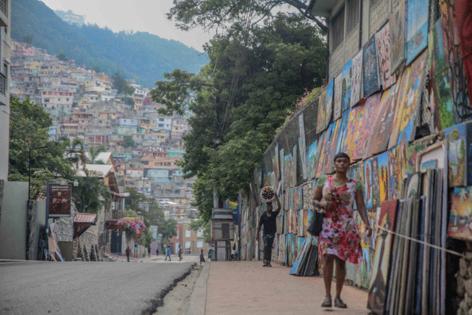 Wearing the required white suit and black tie of Haitian leaders, Jimmy “Barbecue” Chérizier, a former cop turned wanted gang leader, walked up Sunday to the monument commemorating the assassination of the founding father of the nation, Jean-Jacques Dessalines, and placed the traditional wreath at its feet before giving a military salute.

Playing the official role of a head of state and brazenly showing his power, Chérizier showed up accompanied by cameras, a crowd and his own delegation — heavily armed, hooded gang members dressed in T-shirts marked “Justice for Jovenel.”

Hours earlier, armed gunmen had blocked access to the historic site by the country’s acting prime minister, Ariel Henry. Forced to flee the area under a hail of gang gunfire, Henry, also dressed in the customary white suit, had to settle for laying the traditional wreath at the altar of a museum in downtown Port-au-Prince where Dessalines’ remains are kept.

Gangs have become so powerful in a chronically unstable and volatile Haiti that a simple time-honored tradition like the public commemoration of the Oct. 17, 1806, death of Dessalines, carried out by Haitian leaders over the years, is now being held hostage by the country’s criminal gangs.

Since 2018, when President Jovenel Moïse and another one of his prime ministers, Jean-Henry Céant, were chased from Pont-Rouge, the site north of the capital where Dessalines was killed and the monument is located, no Haitian leader has been able to set foot in the area.

The incident unfolded while 16 Americans and a Canadian were being held captive by another notorious gang leader on the eastern outskirts of the capital. It illustrates how the state authorities in Haiti have been made completely irrelevant by gangs who tax citizens, dictate when they can or can’t take to the streets and even block government officials from fulfilling their obligations.

“They are the government,” Gédéon Jean, a human-rights activist who monitors Haiti’s kidnappings, said about the armed groups that now encircle almost every section of the capital and other key cities in the Caribbean nation. “They are the ones who decide to kill someone if someone has done something to you; they decide whether and when to tax you.

“What is developing here is some sort of quasi-state, the same like you have with ISIS in Syria,” added Jean, who runs the Center for Analysis and Research in Human Rights in Port-au-Prince. “They are not there yet, but all of the conditions are ripe for them to go this route and you will see they have developed a certain autonomy.”

Haiti has no shortage of problems. There is the still unsolved July assassination of its president, Moïse, in his private residence above the capital; the deepening humanitarian crisis triggered by the deadly Aug. 14 earthquake and the tropical storm two days later in the southern peninsula; a crumbling economy and worsening political volatility, all of which are stoking a new migration crisis.

But the No. 1 problem that needs to be resolved, Jean and others say, is the question of criminality, kidnapping and insecurity that is driving instability.